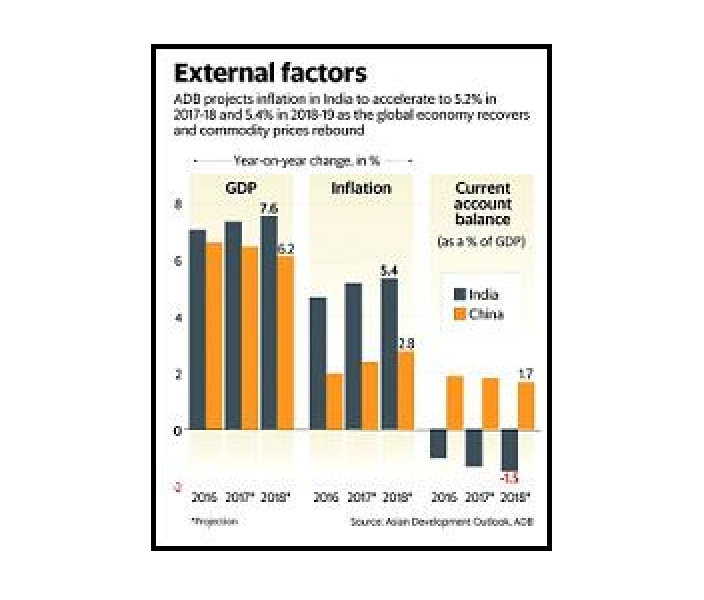 Manila – Growth is picking up in two-thirds of the economies in developing Asia, supported by higher external demand, rebounding global commodity prices and domestic reforms, making the region the largest single contributor to global growth at 60 per cent, according to the Asian Development Bank.

In its “Asian Development Outlook 2017”, the ADB forecasts growth of gross domestic product in the Asia-Pacific region to reach 5.7 percent in 2017 and 2018, a slight deceleration from the 5.8 per cent registered in 2016.

With normal weather supporting agriculture and the steady recovery in major industrial economies boosting exports, growth will pick up in nearly all economies in Southeast Asia, nudging average growth to 4.8 percent in 2017 and 5.0 percent in 2018.

The only exception is the Philippines, where growth will moderate from its record 6.8 per cent in 2016 to a pace approaching 6.5 per cent this year and next.

While higher infrastructure investment will provide an additional impetus to growth in Brunei, Indonesia, Laos, the Philippines and Thailand, record foreign direct investment will be a key factor supporting growth in Vietnam.

Strengthening growth and rising international oil prices will mean higher inflation and a narrower current-account surplus for Southeast Asia. Average inflation is forecast to rise from 2.1 percent in 2016 to 3.3 percent this year, edging up further to 3.5 percent next year.

For Myanmar, despite the GDP slowdown in fiscal 2016 ended on March 31, the ADB forecasts Myanmar growing further this year and beyond if it can address some challenges.

Yumiko Tamura, officer-in-charge of ADB’s Myanmar resident mission, said at the launch held April 6 of the development lender’s annual report that Myanmar’s growth rate will hit 7.7 percent this fiscal year and speed up to 8 per cent next fiscal year.

According to the report, Myanmar’s GDP growth slowed to 6.4 percent last year from 7.3 percent in fiscal 2015. Inflation eased, but the current account deficit worsened. “We are confident that Myanmar will grow further until fiscal 2018. It is the last frontier among Asean countries, which has opened to the regional and international arena.

“So there are certain disadvantages of [being] a latecomer, as well as certain advantages. This country can invite businesses from developed economies,” Tamura said.

“A lot of development-cooperation agencies including ADB actually look at the very promising prospects of the public-private partnership. “This is the model where basically the public sector and the private sector – both domestic and international – actually cooperate to pursue certain projects, strategically infrastructure projects in Myanmar.”

The private sector could be mobilized more effectively for available funding, and there is huge potential to grow up private sector investment, both from foreign direct investment and domestic businesses, she added.

Yasuyuki Sawada, the ADB’s chief economist, told a press conference in Hong Kong that developing Asia continued to drive the global economy even as the region adjusts to a more consumption-driven economy in China and looming global risks.

“While uncertain policy changes in advanced economies do pose a risk to the outlook, we feel that most economies are well positioned to weather potential short-term shocks,” he said. Industrial economies are gathering momentum, with the US, the euro zone and Japan expected to grow collectively by 1.9 percent in 2017 and 2018.

Rising consumer and business confidence and a declining unemployment rate have fuelled US growth, but uncertainty over future economic policies may test confidence.

The euro zone continues to strengthen, but its outlook is somewhat clouded by uncertainties such as Brexit. Japan remains dependent on its ability to maintain export growth to continue its expansion. The Nation