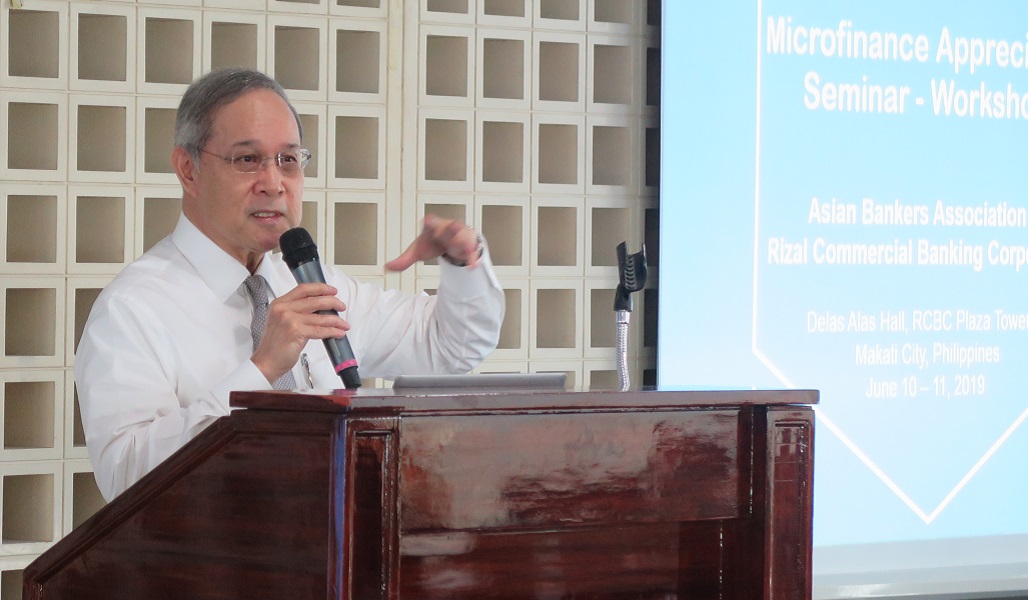 Manila – The two-day workshop jointly conducted by Rizal Commercial Banking Corporation (RCBC) and Rizal MicroBank (RMB) provided thirteen bankers from Bhutan, Iran, Maldives, Nepal, Sri Lanka and Taiwan the opportunity to gain know-how in establishing and developing a profitable microbank through the sharing of the experience of RCBC & RMB in the Philippine market.

Held at the RCBC Plaza Tower in Makati City, the Microfinance Appreciation Workshop was designed to enable participants to: 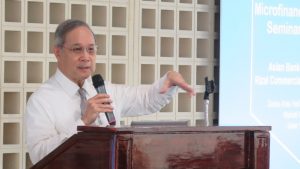 The program started with the welcome remarks from Mr. Gil A. Buenaventura, President and CEO of RCBC, followed by a group photo with all participants, speakers and support staff who helped made the program a success.

Mr. Buenaventura thanked all participants for joining the program and explained the role that RMB places in the overall strategy of the RCBC Group. Mr. Buenaventura said that “RMB serves as the group’s vehicle in reaching out to market segments at the base of the pyramid who remain unbanked and underserved. By mainstreaming these potential clients into the formal financial system, RCBC and RMB fulfill a very important mission in further advancing financial inclusion in the country and help in nation-building.”

The first presenter of the workshop was Mr. Joseph Daniel Lumain, Head of Strategic Partnerships and Special Initiatives at RMB who set the expectations and general microfinance issues to be covered during the workshop. 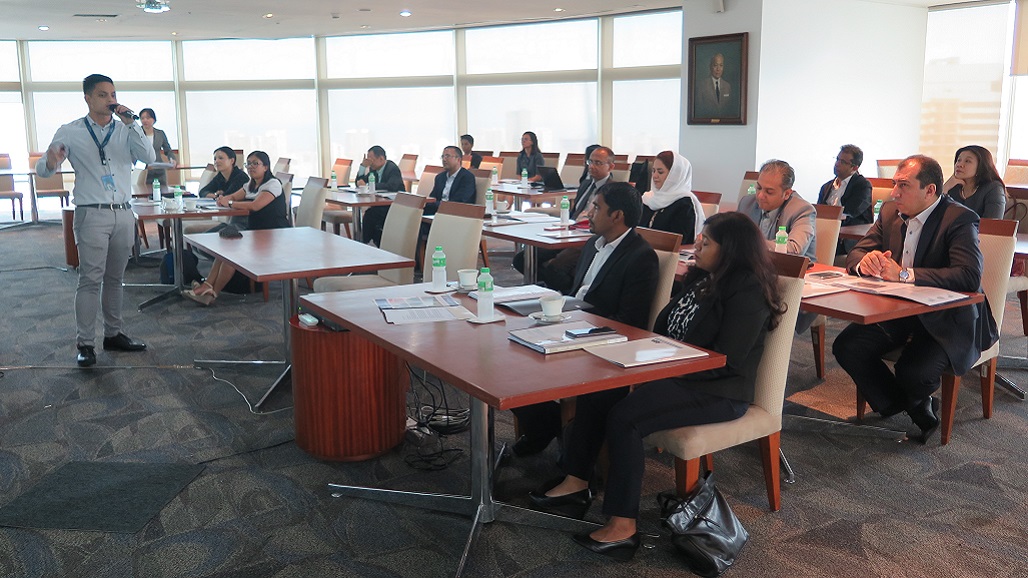 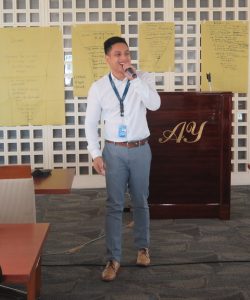 The key issue that Mr. Lumain stressed was the concept that microfinance, as defined by the Bangko Sentral ng Pilipinas, is NOT a (1) subsidized credit, (2) dole-out, (3) salary, (4) consumption loan, and/or (5) cure-all poverty reduction.He further explained that it was only after eight arduous years of work that RMB has turned a substantial profit from its operations under clear and fair rules of microfinancing.

Moreover, Mr. Lumain informed delegates that prior to entering the microfinance market, bankers should focus on four key premises: (1) microfinance targets the entrepreneur poor, (2) different market realities determine different financial products and services, (3) there is no effective collateral, and (4) training the entrepreneur is part of achieving success.

Mr. Raymundo “Bong” Roxas, President of RMB, explained during the “Background on RCBC” session that 99% of all enterprises in the Philippines are micro, producing 34% of GDP while SMEs account for 63% of employment.

Based on above-mentioned statistics, the Philippine microfinance market could be considered quite large, given that 21% of the 104 million Filipinos are considered poor. However, the potential microfinance market is effectively smaller because, as RMB learned, sometimes through trial and error, only a segment of the poor has entrepreneurial traits. According to RMB, this segment of the poor population is the target market and in need of loans for business operations and expansion.

Mr. Roxas explained that the poor population can be segmentalized into a pyramid composed of four business strata: (1) ultra-poor at the base, (2) laboring poor, (3) self-employed poor, and (4) entrepreneurial poor at the top. 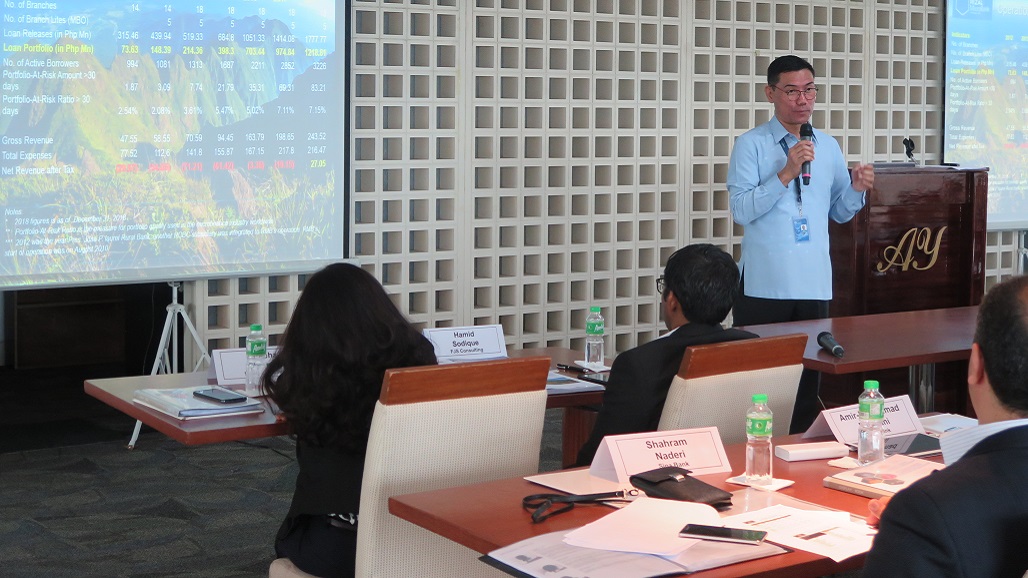 According to RMB, its target client is the self-employed and entrepreneurial poor, representing approximately 33% of the pyramid.

With this information, the Rizal Group decided in 2010 to embark on the business of microfinance; and by 2011 the Rizal Microbank (RMB) started formal microfinance operations in Davao City in southern Philippines.

Mr. Roxas explained that RMB faces a particular credit risk because of three specific market conditions: (1) microloans are unsecured, (2) the loans are payable in 12-months maximum term, and (3) there is no credit bureau.

To assuage risk, RMB has created its own credit analysis process that requires a week to completely assess a new client’s creditworthiness.

New clients are assessed based on “Character & Capacity”; where character is evaluated through a series of personal interviews with the clients’ relatives, friends, neighbors, business partners and suppliers.

Capacity is assessed based on the cash flow indicated by personal registrations, receipts, inventory samples, interviews with suppliers and buyers, etc.

Mr. Roxas pointed out that “new improvements in technology and psychometric techniques will help increase accuracy and reduce the approval time and cost.”

As Mr. Roxas proudly explained, the 2018 RMB’s profit is an indication that microfinance can be profitable under stringent internal and external controls typical of traditional banking, along with some changes in the management of the loan process that are particular to this underserved market segment. 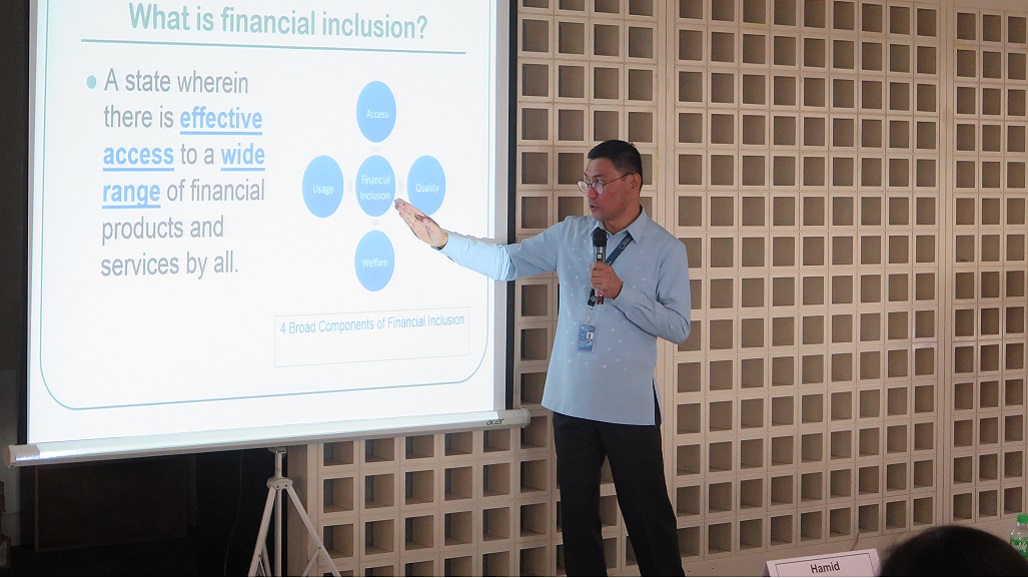 With a graduation rate of approximately 20% to small business loan rank and a drop-out rate of 2-3% per month, the stability of its customer base will help RMB sustain profitable operation; and with the expansion of new products and services, RMB is set in reaching 22% ROE by 2022.

In the words of Mr. Roxas, RMB is helping materialize the aspirations of small people by being a “caring, friendly and dynamic neighborhood bank.”

In terms of the design of microfinance loan products, Ms. Emelita B. Rocero, Head of Branches and Lending Operations at RMB, explained the importance of market research because the target market is a complex and unexplored market segment that differs even from region to region. 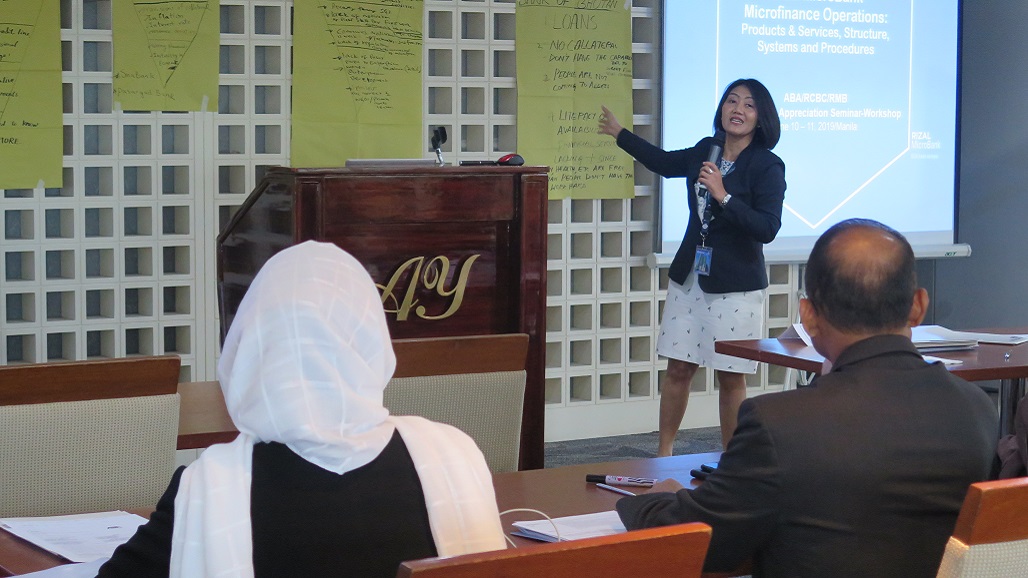 This market development is expected to help sustain profitability and has prompted Mr. Roxas to raise its ROE target by 2022 while reducing PAR simultaneously.

Ms. Rocero further explained that microfinance market demands specific products that change over time, given the 12 months’ loan term. Equally important is service since the target customer appreciates the attention and personal contact provided by the Account Officers.

To emphasize the critical role that savings play in the customer’s success, Ms. Rocero said that “the poor can save” and saving needs to be encouraged. Customer saving is a policy objective in RMB and every RMB microfinance customer must agree to save a percentage of his/her cash flow and continually increase the amount.

RMB presented some customers’ success stories. For instance, there was one entrepreneur who started from scratch; and over time has saved over US$50,000 and expanded her business many folds. There is also the case of the used tires store owner who has expanded his original store to a network of six (6) branches which now also sell new tires.

Currently, RMB uses a statistical method in which large poor population centers are delimited and a set percentage of their population is determined to be entrepreneur poor. Then, given the size of the potential customer base, RMB decides the structure of the banking organization that will serve that community.

For his part, Mr. Roxas expressed his strong optimism in the future of RMB’s microfinance operations, and with substantial profits at hand, encouraged investing in technologies to cautiously expand the customer base and to deepen the quality and variety of services. 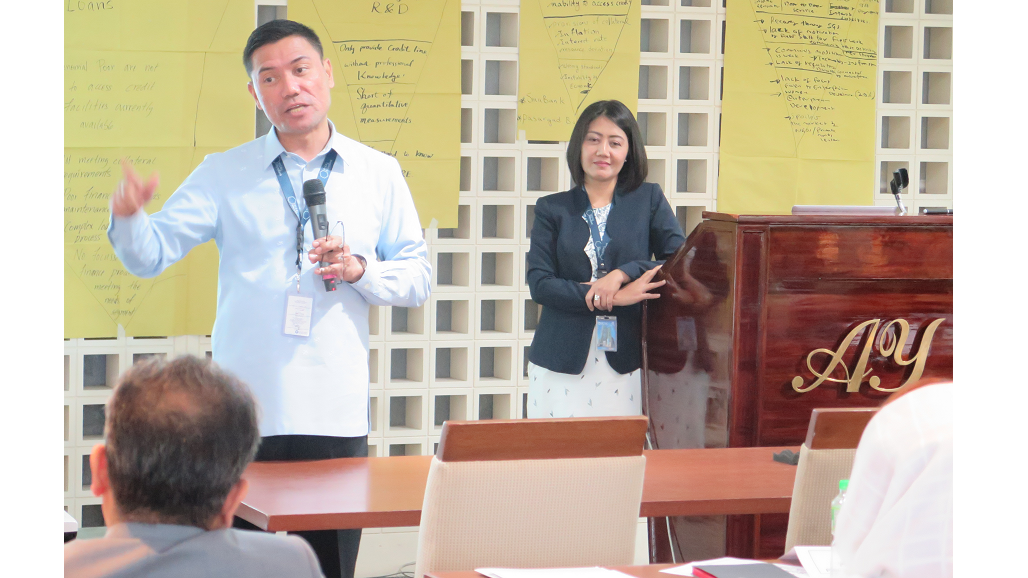 During the two-day workshop, all the delegates also had the opportunity to explain the current microfinance situation in their respective countries, as well as the obstacles they face in developing the microfinance market and its prospect.

In conclusion, Mr. Roxas said that given the advances in fintech which substantially reduces capital expenditure and availability of information including those shared by institutions already in the microfinance market such as RMB, ABA bankers should consider entering the market not only for profit reasons, but also to include the unserved entrepreneur poor into the formal economy so that they financially succeed as well.

7. Certificates of Participation to all bankers

Each of the 13 delegates received a Certificate of Participation from Mr. John Thomas G. Deveras, SEVP & RCBC Strategic Initiatives Head and RMB Vice Chairman of the Board. 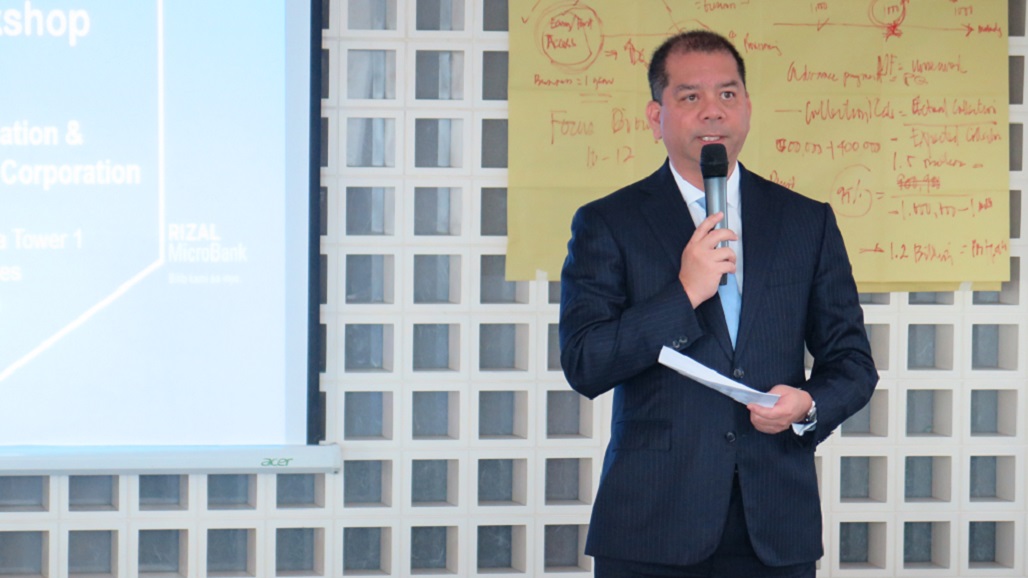 In his closing remarks, Mr. Deveras thanked all participants for joining the RCBC Microfinance Appreciation workshop and shared anecdotes and lessons learned since the establishment of RMB. He emphasized that the job was not easy. Long term commitment is necessary, pointing out that the efforts of RCBC & RMB have eventually resulted in profits. He wished that all participants return home better prepared to venture into the microfinance business.

All participants expressed great satisfaction for the two-day course and thanked RCBC for its generosity in sharing its valuable microfinance know-how.