How Inflation Is Impacting Pension Savings 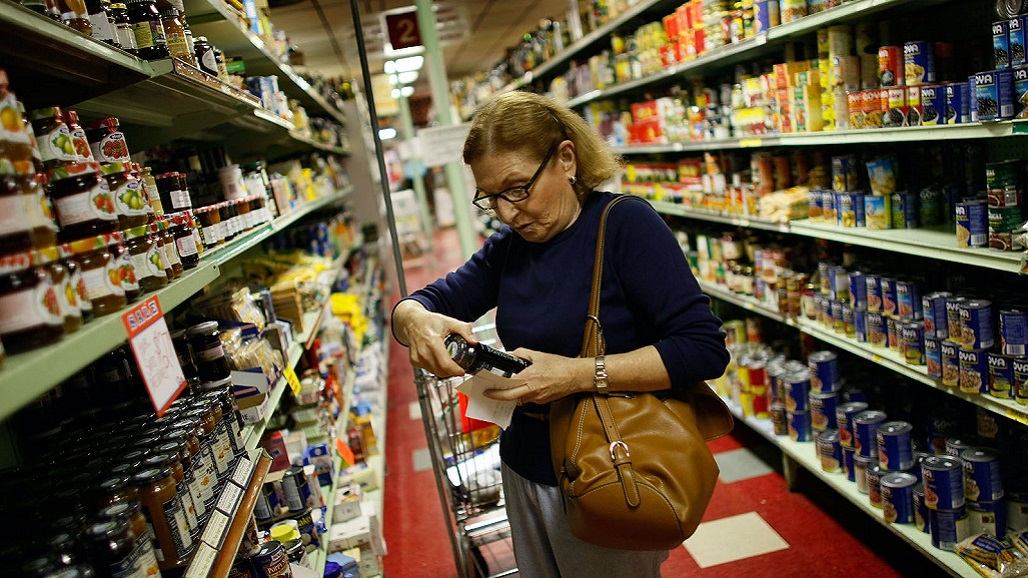 A shopper reads a product label at Lorenzo’s Supermarket in North Miami.

The emerging high-inflation landscape has the potential to erode a decade of increased “real” capital value. Actual and market expectations of inflation in the short-to-medium term have increased to historic highs. So, what exactly has happened, and what does it mean for pension plans?

Soaring inflation was already a dominant theme heading into 2022. Central banks around the globe adopted loose fiscal and monetary policies to combat the COVID-19 pandemic and were slow to begin tightening. The Federal Reserve kept short-term borrowing rates near zero and indicated that it expected to keep these rates near zero until at least 2023. The European Central Bank and Bank of England all kept rates unchanged and increased the size of their bond buying programs.

This overstimulation by policymakers, coupled with supply chain disruptions and a consumer base with stronger purchasing power, led to concerns around higher inflation, exacerbated by rising input prices and the circuitous relationship between market expectations and inflation rates.

The ultimate result is realized inflation at its highest level in recent history.

Breakeven rates followed the same upward trajectory over 2021, indicating a market expectation of systematically higher levels of inflation in economies that had not experienced material inflation levels since the global financial crisis. 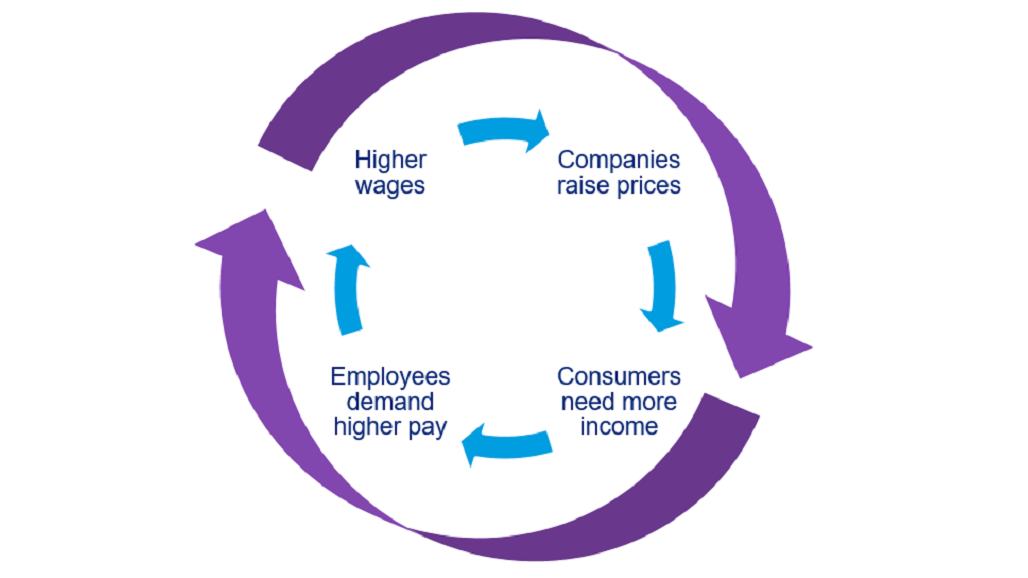 As 2021 drew to a close, stagflation was viewed as a relatively low-risk scenario given the strong growth momentum seen across much of the world. However, the conflict in Ukraine and the impact of subsequent sanctions — along with the direct impact of the conflict on the supply of raw materials and energy supplies — have led to further upward pressure on commodity prices. The resulting mix of higher inflation and lower growth, combined with a shortage of labor supply in many areas of the economy, has raised the risk of sticky inflation spreading through the economy.

This could lead to stagflation in the medium term, although the base case may be one of lower, yet positive, global economic growth and inflation peaking later and at higher levels. 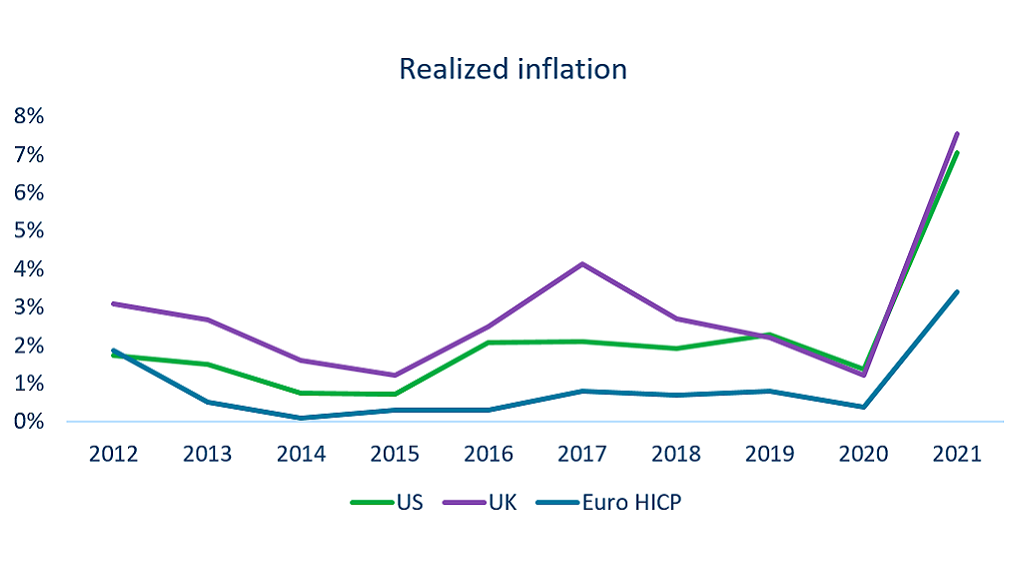 For Defined Contributions (DC) plans, higher levels of inflation do not have a direct funding or balance sheet impact for sponsors. There are, however, potentially significant implications for current and former employees through the erosion of the purchasing power of their retirement savings.

In DC plans, retirees and near-retirees are considered the more inflation-sensitive groups. Increases in the price of goods and services, including health care costs, can be especially burdensome to retirees on a fixed income, and the time horizon to recover any erosion of purchasing power through salary increases is reduced for those in the latter stages of their career.

The potential monetary actions taken by governments and central banks to curb inflationary pressures can also hurt conservatively invested participants, e.g., those in the later stages of lifestyle investment strategies. Interest rate increases aimed at curbing inflation have a negative impact on bond prices, which may lead to negative returns on bond funds often used by near-retirees and retirees.

The pension landscape in different countries will also impact the ability of retirement savings to keep pace with inflation. Markets with strong insurer presence or guaranteed returns are likely to produce returns linked to nominal returns. Other markets will have a cultural bias toward nominal assets which may traditionally have been considered lower risk.

In general, the liquidity requirements for DC plans mean that it is difficult to invest in assets that offer both attractive returns and a hedge against rising inflation. Many DC plan sponsors may need to carefully consider this tradeoff if inflationary pressures persist and real yields on government inflation-linked bonds remain low.

Understanding which part of your population may be the most vulnerable to an inflationary period can help you understand what actions, if any, you should consider.

What Does This Mean for Defined Benefit Plans?

The impact of inflation and inflation expectations on funded plans can be mitigated through hedging. Inflation-linked securities provide the most obvious match in many geographies as both funding requirements and balance sheet obligations are sensitive to both inflation and interest rates.

The availability of inflation-linked bonds varies by market and, as a result, it may be difficult to source significant levels of direct inflation hedging. Even where inflation-linked assets are available, they often do not exactly match the relevant inflation measure that determines the rate of benefit increases.

Where the pool of available assets is limited, sponsors could consider other inflation-linked investments, e.g., euro inflation-linked bonds for all euro-denominated plans. Real asset allocations, such as property and infrastructure, can also provide inflation exposure as part of a diversified investment strategy.

The impact on inflation for plan members will depend on whether, and to what extent, benefits increase with inflation. In most countries, state benefits generally include an element of cost-of-living increases but often with a time lag. However, in most countries, inflation-linking in company-sponsored plans is not mandatory, or only mandatory to a limited extent.

Where plan trustees exist, companies can expect greater pressure on plan sponsors to agree to grant discretionary pension increases in cases where pensions are not increasing or are increased significantly below the rate of inflation. This pressure is likely to be even higher where funding surpluses exist.

What Does This Mean for DC Plans and What Can Employers Do?

Many employees may be concerned to see the fall in their account balances since the beginning of the year, as well as directly experiencing the rapid rise in the cost of living. Plan sponsors may seek to reassure plan members that such market corrections happen from time to time and that it is important that members take a longer-term view.

In fact, the rise in discount rates will reduce the cost of purchasing an annuity, offsetting the impact of asset returns in many cases. Plan members close to retirement that intend to take a lump sum will likely have seen a fall in the expected amount of benefit. This highlights the need for strong communication of the investment options available, and the risks involved, in order to help employees to make the right investment decisions during their careers.

Understanding which part of your population may be the most vulnerable to an inflationary period can help you understand what actions, if any, you should consider. As outlined above, retirees and near-retirees are likely the more inflation-sensitive group. Plans with greater weighting to these categories may require additional focus and attention, as many retirees will be concerned about the erosion of the real value of their pension. If employees have the choice of purchasing an annuity at retirement, a key consideration will be to what extent they have purchased inflation protection, as a higher level of inflation protection will significantly reduce the initial amount of pension.

On the investment side, sponsors may wish to consider the construction of default funds to reduce concentrations of nominal investments. Where possible, inflation-linked investments could be made available or included as part of a diversified lifestyle strategy in order to provide some level of real income protection in retirement. Sponsors may wish to leverage providers and external fiduciaries such as trustees to incorporate inflation protection options.

Sponsors should also seek to inform members of how their portfolios or retirement spending may be impacted by inflation. Providers and local consultants will likely have educational materials readily available for your population, which can be deployed through targeted communication exercises or highlighted on provider websites. 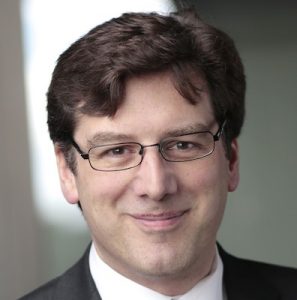 Graham is the Global Defined Benefit Segment Leader for Mercer’s Wealth business and a Global Consultant within the Multinational Client Segment. Graham began his career with Mercer in 1990 in the UK actuarial team in Manchester before moving to Mercer’s International Consulting Group in London in 1998 and then to Munich, Germany in 2004.  In Munich, Graham led Mercer’s M&A business before taking on the leadership of the International Consulting team in 2010. Graham is married with four children and is based in Munich, Germany.