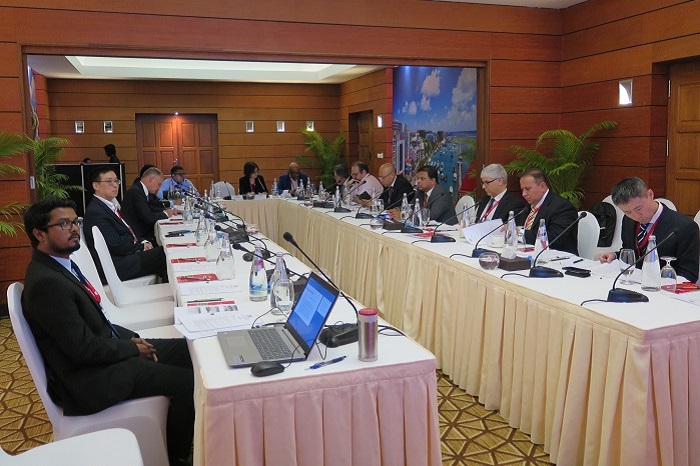 (1) To share the experience of Maybank Islamic in promoting cooperation among relevant regulatory authorities and among banking units within both conventional and Islamic banking systems. 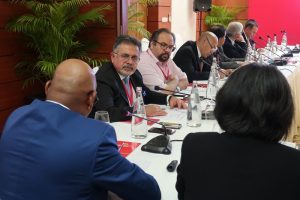 (2) Islamic banking is a banking system that is based on Shariah law and structured on risk sharing1. When compared to the conventional system Islamic banking has two distinct features: (1) that it prohibits interest-based financing transactions; and (2) its mode of transactions are designed to facilitate a more equitable relationship between capital providers and those in need of funds.

(3) The underlying principles of Islamic banking entail that risks and profit are mutually shared in a fair manner for all transactions and that it must be based on a tangible activity or asset. It avoids interest (riba), gambling (masyir), excessive uncertainty (gharar) and speculative activities that commonly lead to creating opaque financial instruments are prohibited.

(4) The Sukuk (Islamic bond market) lie within the ambit of Islamic banking. Sukuk ‘bonds’ are structured in such a way that the returns are linked to the underlying asset rather than in the form of interest. The overall Islamic banking raison d’etre is to enable a framework that is inclusive and ensure the benefits of economic growth is shared across all members of the Society.

(5) Islamic banking has had a phenomenal growth in Malaysia. According to the country’s central bank, Bank Negara Malaysia’s (BNM) data, Islamic assets has had a 5 years CAGR growth of 11.6% compared to its conventional counterpart at 4.6%. Islamic assets in the country comprises 26% of total banking assets. Maybank Islamic Berhad (“MIB”) is the largest Islamic business in Malaysia and in Asia Pacific. The financing asset size has surpassed its parent Maybank and is at 57% of total domestic financing assets. Its continuous year on year growth has led MIB to become the hallmark of the Islamic banking success story in Malaysia.

(6) This paper aims to explore the MIB Islamic banking journey and discuss how it was able to grow successfully under the scaffolds of the country’s sound regulatory framework and strong partnership with the related governing institutions. It also provides the operational structure of the MIB business and encapsulate factors that enable its achievements to date.

(7) Maybank Islamic Berhad (MIB) is a subsidiary of Maybank and was first established as an Islamic banking window in 1993. It became a full-fledged subsidiary of Maybank in January 2008 and as at December 2017, MIB held a share of assets, financing and deposits in Malaysia at 31%, 34%, and 30% respectively. Currently, MIB ranks amongst the top 5 largest banks globally by asset size with total assets recorded at USD 54.53 billion as at March 2018. In the 2017 financial year, MIB ranked number one in the sukuk league table for global currency and ringgit issuances. In July 2018 it won the prestigious The Banker’s Islamic Bank of the Year 2018 award for the Asia Pacific category.

(8) Whilst many factors often come into play to achieve such success, MIB’s main determinants of growth can be narrowed down to two- the conduciveness of the country’s Islamic finance landscape in which it operates and Maybank Group’s commitment and internal strategy to push forward the Islamic banking agenda for its Islamic banking business.

(9) Amongst its international peers, Malaysia’s vibrant Islamic economy is the largest. The approach of Islamic banks in Malaysia to develop products based on the needs of the entire market, regardless of religious beliefs has allowed it to tap into consumer segments that are beyond the Muslim population. It provided an alternative option via Islamic Banking products, which also demonstrated to be equally competitive to its conventional counterpart. Moreover, the standardisation of Shariah contracts and prudent regulatory support cultivated a market landscape that was conducive for the propagation of Islamic Finance.

(10) Islamic banking in Malaysia began 55 years ago with the inception of Lembaga Tabung Haji in 1963, the country’s sole pilgrimage fund which remains in operation to this day. Following this, Malaysia passed the Islamic Banking Act (IBA) 1983 which led to the creation of the first Islamic bank in the country, Bank Islam. In an effort to grow the industry, the regulators allowed for conventional banks to offer Islamic products and services through the Islamic banking window model. In 1993 Maybank became the first bank to offer an Islamic window and after having achieved unprecedented levels of growth, regulators allowed the conversion of Islamic windows into Islamic banks.

(11) The following year, BNM launched Malaysia Islamic Finance Centre (MIFC) and released new guidelines and incentives to further spur the development of the Islamic banking industry. In 2013, the Islamic Financial Services Act 2013 was promulgated in a bid to improve on the previous Islamic banking act. It became a landmark achievement in terms of Islamic financial regulations as Islamic banks had an official set of regulations that distinguishes it from its conventional counterparts, imparting it an idiosyncratic identity. This accommodative stance towards Islamic banking has spurred a world leading industry that is often benchmarked by new up and coming Islamic finance markets abroad.

(12) MIB has also benefited from a plethora of initiatives introduced by BNM and Securities Commission (SC). Aside from the introduction of MIFC, BNM introduced a Financial Sector Blueprint that spans from 2011 to 2020, laying out the internationalisation of Islamic banking in Malaysia. Corresponding to the objectives of enhancing the industry’s efficiency and soundness, several regulatory amendments were made to ensure Islamic transactions were not subject to adverse tax implications through the issuance of stamp duty, real property gains, Islamic fund management services tax exemption orders over the years. Additionally, the government undertook measures to provide attractive tax incentives such as those provided for the issuance of Islamic securities.

(13) The SC has also recently launched the Sustainable and Responsible Investment (SRI) Sukuk Framework to bolster the sukuk sector. In 2018, the SC provided tax exemptions on Green Sukuk Grants allowing sukuk issuers to benefit from stamp neutrality, income tax neutrality, and tax deductions. It is aimed to stimulate the supply side of Islamic Securities by making them more feasible and competitively priced to meet growing investor demand. Furthermore, investors of such securities will enjoy tax exemptions on the returns earned.

(14) Indeed it is the strong regulatory framework and government support that have provided the means in which Islamic banking was able to thrive. Active dialogue with industry players also served as an important apparatus for the government to meet industry’s needs. A consortium of local and international Islamic banks were in constant discussion with regulators through the Association of Islamic banks providing various input and practical insights on how the industry could be improved further.

(15) The most recent MIB and the regulator’s partnership can be seen in the latest push by BNM towards positioning Islamic banks to unlock its full potential to meet the Customer’s and community needs by introducing the Value Based Intermediation Strategy Paper in 2017, which will be pioneered operationally by Islamic banks. The Value Based Intermediation (VBI) initiative is an ideal example that puts forth the collaboration of industry players to ensure the continued growth of Islamic Finance. VBI aims to deliver the intended outcomes of Shariah through practices, conduct, and offerings that generate positive and sustainable impact to the economy, community, and environment, whilst delivering sustainable returns and preserving the long-term interests of shareholders. The vision under VBI is for the products and offerings of Islamic banks to be more impact driven. MIB took the opportunity to be a part of the industry player – regulator platform called the Committee of Practitioners (CoP) established by BNM to facilitate the adoption of VBI via promoting industry wide knowledge sharing, resolve implementation issues, and demonstrate the principles of VBI through industry level projects. The CoP is aimed to assist subsequent adoption of VBI practices by other banks and ensure effective collaboration with relevant government agencies in order to bring about a positive impact to the daily lives of consumers and the wider public.

(16) Arguably it can be claimed that the establishment of robust regulatory frameworks and active industry-regulator relationship are factors that orient the industry and MIB toward its leading global status today.

Maybank Islamic and the Growth of Malaysia’s Islamic Banking Industry

(17) The role of regulators in ensuring the prosperity of Islamic banking is as crucial as the ability of the institutions themselves in driving the growth of the Islamic banking business. MIB works closely with its parent company, Maybank (“the Group”) to develop the Islamic banking business. In 2010, the Group undertook a conscious effort to prioritise Islamic products and offerings to customers under an internal strategy called “Islamic First” across all of the Group’s lines of businesses. As of December 2017, Islamic banking business as a whole contributed 28.8%, 31.0% and 26.6% of Maybank Group’s Asset, Funding, and PBT, respectively. The Islamic First Strategy enabled MIB’s assets to reach a high of USD 49.3 Billion. Concurrently, MIB’s total financing and PBT contribution stood at a high of USD 39.8 billion and USD 553.7 million, respectively. Figure 1 and 2 below shows that MIB remains the largest Islamic banking institution in Malaysia by total assets and total financing assets. In Figure 2, its Total Deposits and Unrestricted Investment Accounts stood at USD 37.6 Billion as at December 2017, almost double its nearest competitor. 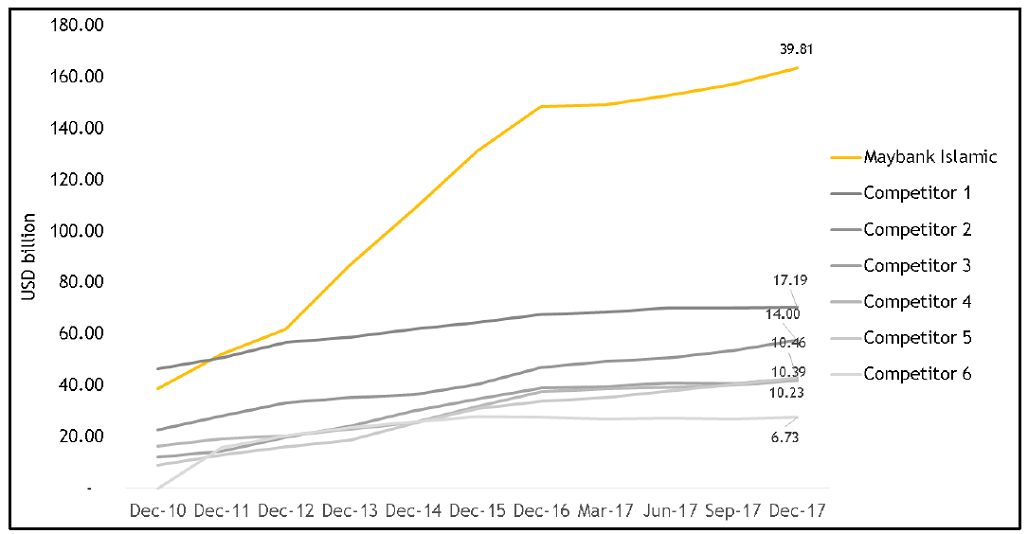 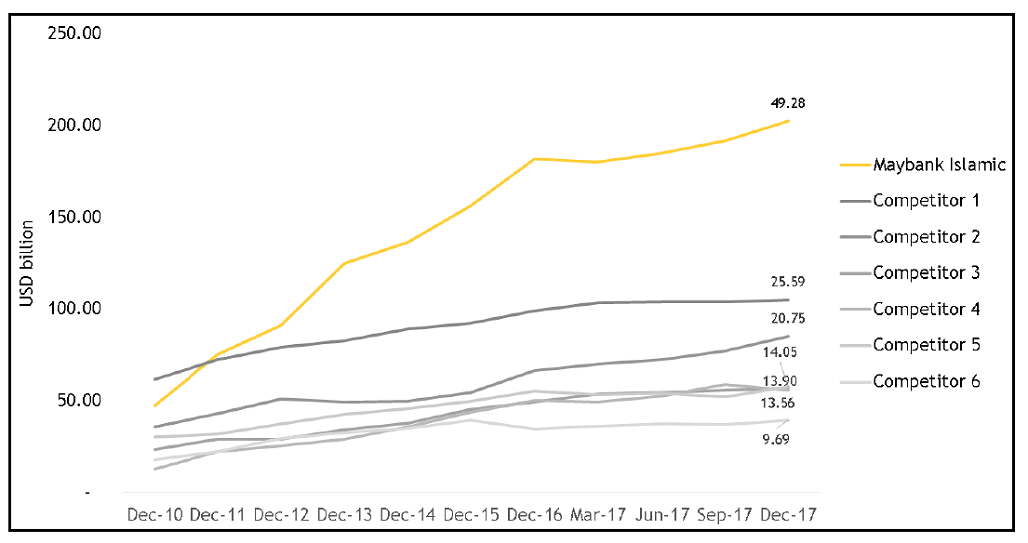 (18) It is worth noting that in terms of its operational structure, MIB has reasonably benefited from the leveraged model, in which the Group’s economies of scale advantages are cascaded to MIB through operational services that are rendered at lower costs. Almost all of its business and support services which include branch front sales services, marketing, finance, legal, compliance, audit and treasury are leveraged upon the Group. This design has allowed MIB to yield better results in channeling its focus toward product innovation and in driving the business forward. Consequently, MIB is often able to offer first-to- market products, for example in 2018 MIB launched HouzKey an alternative method of home financing through a lease arrangement based on the Islamic concept of Ijarah (lease) that provides the customers the option to purchase the property, after a certain period of rental.

(19) As it gears toward an aspiration to become the global leader in Islamic Finance by the year 2020, through the support of the regulators and its parent bank MIB is poised to enter its next stage of growth.

(20) Much of the momentum that has gathered in the Islamic banking industry stems from the willingness of regulators to establish a conducive environment that enables collaboration between all market participants. Moving forward, the preservation of relationships and cooperation between regulators is paramount to ensure continued growth to both the industry and MIB’s Islamic banking business. Moreover, the looming uncertainty inherent in the overarching global economy will place a greater emphasis towards regulatory and industry collaboration to uphold economic resilience.

1 Risk sharing is a contractual or societal arrangement whereby the outcome of a situation is borne together with by individuals or entities in a community (Askari et. Al 2015)