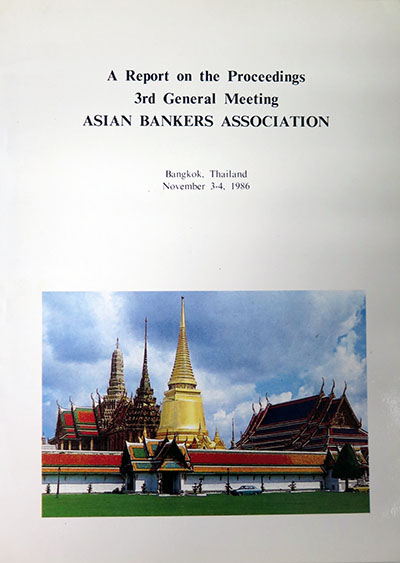 1. The 3rd General Meeting of the Asian Bankers Association was held in Bangkok, Thailand on November 3 – 4, 1986. The theme of the meeting was Prudential Management of Banks” and a seminar on the same subject was held in connection with this meeting on November 3.

2. The meeting and seminar attended by some 100 participants coming from banks was opened by Mr. Suthee Singhasaneh, Minister of Finance of Thailand. He called on members of the Asian Bankers Association to unite and cooperate so as to be able to adapt their national economies and financial markets to external influence. But above all, he said, top priority must still be the maintenance of a strong and stable financial system to protect consumers, institutions and the country.

3. The seminar was presided over by Mr. Stuart A. Fowler, Chairman of the Association. In introducing the theme of the seminar, he said that currently the challenges facing the financial sector, and the banking sector in particular, all over the world were very great. Times are tougher and, in this environment, it is to be expected that the Authorities who have responsibility for the supervision of banks are devoting considerable resources to their talk. It is with this in mind that we conceived the topic of our seminar today, he explained.

4. The seminar was keynoted by Associate Director of the Bank of England, Mr. W.P. Cooke, who was Chairman of a Commission set up by the British Government to study the subject of prudential banking. Speaking from a Central Bank’s view, he urged bankers to be cautious, alive to changes in the degrees of all risks, and to place more emphasis on their staff in order to keep pace with the highly competitive environment in the banking business. He said that risk containment was indeed the major task of the banker. Prudent management must achieve a good spread of risk as well as a clear view of the nature of the risks which are being undertaken, he added.

5. Mr. Trevor C. Rowe, Vice President of Salomon Brothers Inc. and General Manager for Australia and New Zealand, spoke from an investment banker’s view. He said that increasingly the better managed banks will be analyzing the profitability of various business segments and that securitization of assets is likely to be a typical factor in reversing the declining trend in profitability ratios over the next few years. He discussed at length four factors which he believes are the keys to success in capitalizing the challenges and opportunities of the dynamic changes undergoing in the banking sector, namely: 1) senior management ability to cope with new elements of change, 2) prudent, and at times, proprietary investments in technology, 3) a strong and diversified capital base, and 4) a clearly defined domestic and international business plan.

6. Discussing the topic from a Rating Agency’s view, Mr. Edward Emmer of Standard and Poors, presented the dramatic changes in banking and financial institutions and discussed the key factors used by his agency in rating banks. He said that his agency looks at the firm’s assets as to quality, profitability and capital adequacy. He then described the various factors that go into analyzing assets. In making evaluation, it does not only look into track records and current situations but also at the future based on policies and procedures against what can go wrong and these have much to do with prudential management, he said.

7. Mr. David Humann, a Partner in Price Waterhouse, described the banking environment today and the critical involvement of auditors in prudential supervision under that environment. He then pointed to an ideal tripartite relationship among the supervisors, management of banks, and auditors on the demands for prudent management and supervision of banks under the current environment of change. Because of the new dramatic changes in the banking and financial fields, management, supervisors and the auditors must keep abreast of new development and their risk implication, he stated. He added that the manner in which authorities insure compliance with their prescribed rules and regulation for the prudential management of bank largely determines the extent to which external auditors are involved in the supervisory process. He pointed to the on-site examinations now common throughout the world and the need for closer relationship between supervisors and external auditors but that confidentiality must not be compromised as it would, if breached, seriously undermine the relationship between auditors and their banking clients. He then made suggestions which he recognized as would improve the role and meet the requirements of auditors in the new developments in banking.

8. Mr. Stephen I. Davies, Managing Director of the Davies International Banking Consultants, who wrote three books the latest of which is “Excellence in Banking,” explained the background of his studies that brought about the conclusions in his book. In the selection of 15 banks he used as sample banks, he declared there is really no magic nor assurance that they would continue excellence. He found out, however, some common characteristics such as an open culture, especially in horizontal and vertical communications and that they have strong shared values in a proud heritage, they grow their own talent, they have high level of trust, with emphasis on people and performance. They rate profit performance as a value, they are customer-driven, they are willing to invest in new products, they have strong and consistent leadership, they recruit the best people, they invest in training and career development, they have a matrix-based management information and they have a strong and balanced credit process.

9. On Technology and Banking in the 1990’s, Mr. William R. Bowles, President of IBM Financial and Store Systems, said that neither international competition nor technology are slowing down in the aggregate with some area actually accelerating. However, applying new technologies effectively with a systems plan can have a lot to do with remaining successful. He stressed the need for an architectural plan in the application of the new technology to the banking system posed the following questions:

He then described the evolution of the information system and the computer and their application on the various needs of the banking system.

10. After all the speakers have made their presentations, a panel discussion was held with the speakers constituting the panel that replied to questions raised on the floor. The full text of all the above speeches and presentations are published in the ABA Journal of Banking and Finance, second issue.

11. The 3rd General Meeting started with the presentation of the Chairman’s Report by Mr. Stuart A. Fowler. He reviewed the activities of ABA during the last two years. The text of his report is attached herewith as Annex A.

12. The meeting elected unanimously on the recommendation of an Election Committee, the following 14 members of the Board of Directors for 1986-1988:

13. During a recess of the general meeting, the new Board was convened to elect a Vice Chairman from among themselves. Mr. Patrick Yeoh, President of the Development Bank of Singapore, was elected as Vice Chairman.

14. The General Meeting was resumed with the new Chairman presiding over the meeting. In assuming his new position, Dr. Viravan made brief remarks. The text of his remarks is attached herewith as Annex B.

15. On behalf of the new Board of Directors which passed a resolution to honor the past chairman, Dr. Viravan presented a “Distinguished Service Testimonial” plaque to Mr. Stuart A. Fowler for his eminent leadership and services as chairman of the Asian Bankers Association. The plaque is especially prepared for him with the sincere thanks and profound appreciation of the Board and the member, he stated.

16. Nine Country Reports were presented on the “Development of Prudential Banking” in the member countries. The following members made the reports:

The reports are included in the ABA Journal of Banking and Finance, second issue.

17. Prior to the Seminar and after the 3rd General Meeting the Board of Directors met. The minutes of these meetings are attached herein as Annex C and Annex D.

19. The meeting ended at a Farewell Luncheon and Closing Ceremonies held on November 4 with profuse thanks and appreciation to the hosts expressed by Mr. Jeffrey L.S. Koo, for an in behalf of all delegates. The full text of the remarks of Mr. Koo is attached as Annex E.