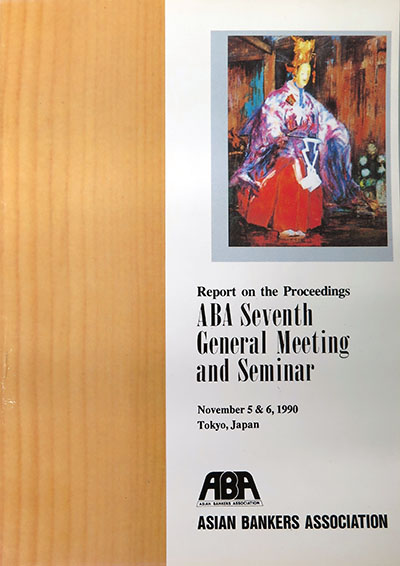 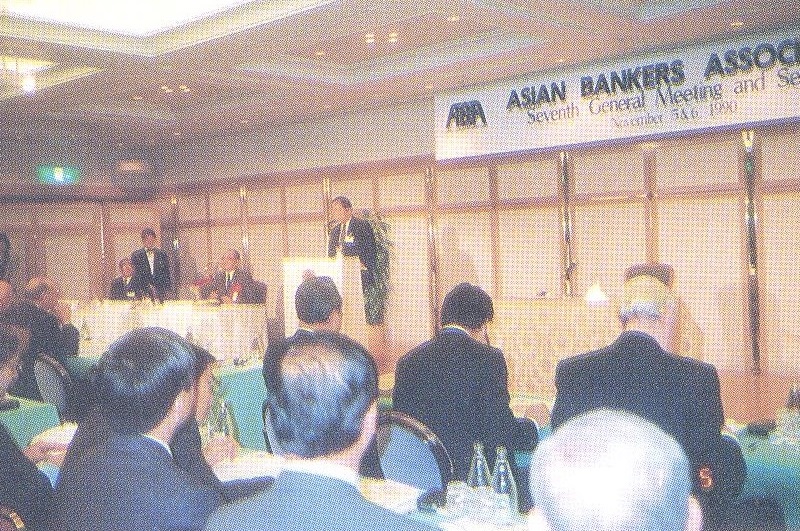 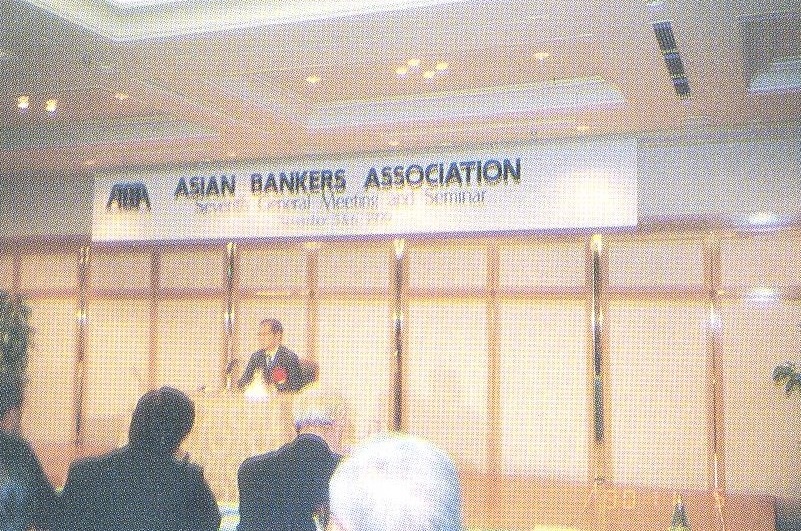 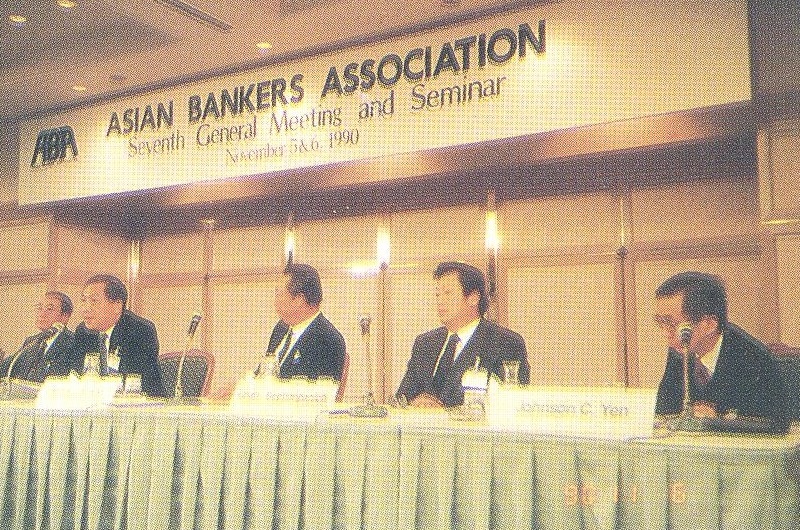 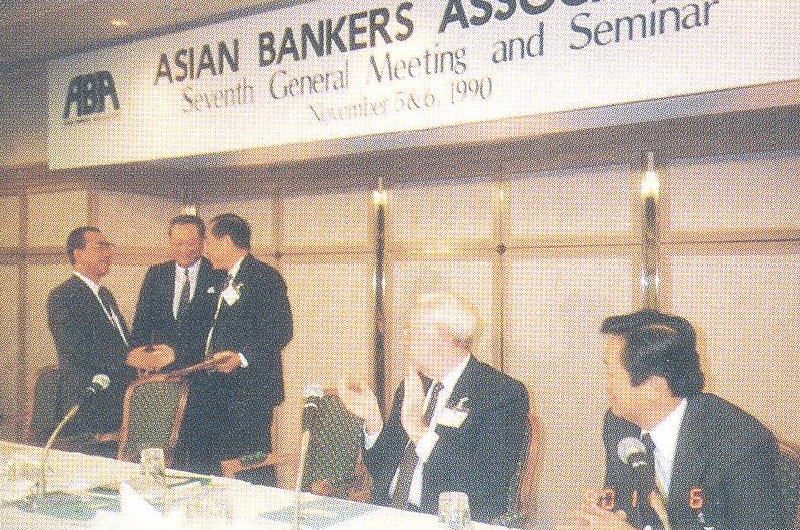 1. The 7th General Meeting and Seminar of the Asian Bankers Association was held in Tokyo, Japan on November 5-6, 1990. Attended by some 170 participants coming from member and non-member banks, the event was hosted by The Long-Term Credit Bank of Japan.

2. The Seminar which preceded the General Meeting, was held under the theme: “The Direction of Regional Cooperation in the Asia-Pacific Towards the Year 2000.” The Honorable Yasushi Mieno, Governor of the Bank of Japan, the Central Bank, made the Opening Address after Mr. Patrick Yeoh, Chairman of ABA, opened the Seminar as Presiding Officer. 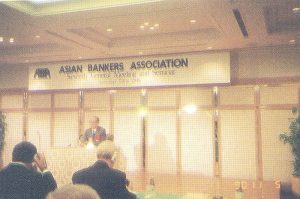 3. The topics were chosen in the light of global developments like the détente in the region following the end of the cold war which is perceived to usher in earlier than expected the so-called “Asia-Pacific Age.” It is intended to provide a clear scenario of the new developments and the role of the region in the changing milieu; prospects in the changing industrial and financial structure of the region and approaches to regional cooperation.

4. Governor Mieno set the tone of the seminar. He cited two connected trends namely: the global shift toward a market economy and the strengthening of inter-dependence among the countries of the region. He warned against creation of economic blocs. He cited the factors of technology, human resources and capital (or goods, people and money) as responsible for high growth in the region. The challenges, he said, to maintaining growth are how best to promote exchange of people and cooperation in transfer of technology within the region. He also explained the need to open markets and liberalization. He called for the building of strong relationship between Japan and the other countries especially of the region.

5. Professor Robert A. Scalapino, Robson Research Professor Emeritus of Government and Director Emeritus, Institute of Asian Studies, University of California at Berkeley presented “The Importance and Tasks of the Region in the International Situation.” He made a sweeping review of the political and economic situation of the countries within the region and identified the region’s task in moving towards the 21st century. Professor Scalapino also pointed to a current revolution that affects every facet of man’s existence, including his values, lifestyle and relationship with others. He will be one of the three leaders of the new global order and with that role go new responsibilities. The tasks ahead will challenge the creativity of those who will lead Asia into the 21st century, he said.

6. Mr. Isamu Miyazaki, Chairman of Daiwa Institute of Research, spoke on the “Outlook of the World Economy and the Positioning of the Asia-Pacific Region.” Mr. Miyazaki traced the flow of historical events and sex areas of problems they are encountering, namely: the problems of regional frictions and oppositions between hitherto latent nationalism and existing structure of nations; the shift towards borderless economies making it more difficult to synchronize the pace of political and economic development; the problem of imbalances in the international payments position between all countries of the world; the energy problem; and atmospheric pollution. He said that all these call for international cooperation as a prerequisite to final solution. He cited the strength of countries in the region in terms of high savings rate, the industrial temperament of the people, and a technologically innovative approach, an appetite for reform and high technological standards as bearing the countries in their march towards the 1990’s or the 21st century. He cited finally the prerequisites for the further success of the NIEs, the ASEAN countries and the role of the Japanese in Asian economic development.

7. The outlook of the economic, industrial and financial situation in each country of the region were presented by country reports. Four eminent speakers later commented on the country reports citing prospects for future regional cooperation in the Asia-Pacific Era.

8. Mr. Hiroshi Takeuchi, Chairman of the Board of Governors of the LTCB Institute of Research and Consulting, Inc. commented on the country reports from a global perspective. Where Professor Scalapino spoke more on the political situation, Mr. Takeuchi reviewed the economic aspects. He pointed to the need for a stable foreign exchange rate, and increase in savings rate if the countries of the region were to take leadership and assume their responsibility in world development.

9. Mr. Chatri Sophonpanich, President of Bangkok Bank, Ltd. spoke from the perspective of South-East Asia. He cited that progress in technology and communications has made all countries very much closer that a crisis in one country affects others, citing the Cambodian crisis, the Persian Gulf and oil crisis. He said that the flow of world trade is being disturbed, giving rise to increasing distrust. He also warned on trade bloc formation saying that what the world needs is cooperation and fair distribution of benefits with less protection. He said that a successful outcome to the GATT negotiations will ensure that free world trade will continue.

10. Mr. Reginald A. Nicolson, Group Managing Director and Chief Operating Officer, Australia and New Zealand Banking Group Ltd., speaking from the perspective of Australasia, stressed the need for cooperation and cited the resources of the region as being complementary and their potentials for intraregional trade. It needs cooperation to capitalize on the region’s strength for everybody to benefit from these potentials. But he expressed concern that Australasia seems to be excluded as part of Asia which, he said, is really unfortunate because it is a part of this region.

11. Dr. Jeffrey L.S. Koo, Chairman and Chief Executive Officer of China Trust Co., Ltd., spoke from the perspective of North-East Asia. He cited the different levels of economic development with Japan leading the others although he said that the rest are trying to restructure to catch up with japan and to quicken their pace to transition. While the North-East Asian countries are relatively better economically than their neighbors, they also have serious problems citing those problems and their strengths. Hongkong is a financial center and reprocessing center of light industries and services being an entrepot to mainland China, he added. He cited the problems as being centered on the exodus of entrepreneurs, mangers and trained manpower and outflow of capital. The situation in Korea and Taiwan are quite similar, he said, as being beset by labor shortages and outflow of capital, rising wages, violet fluctuations in real estate, stock exchange markets, labor disputes, appreciation of the value of currency and pressure of environmental protection. He believes that all these will be automatically solved when their economy has advanced to a higher level of development. Towards the 1990s, they have a great contribution to play in the region and, therefore, they (including mainland China) should be admitted to APEC and GATT, he emphasized. The move towards reunification of China and Korea will definitely be a plus for regional development in the 21st century, he added. 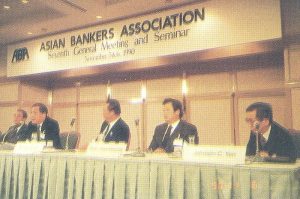 12. The Question and Answer period after the commentaries revealed concerns on the slow pace of development in the Uruguay Round; the decline of stock markets, especially in Japan; rising prices; the need for cooperation in financial services; industrial development; human resources development; and technology transfer.

13. Mr. Tetsuya Horie, Vice Chairman of ABA and President of LTCB, made a summary and proposals. These are included in the speech he presented.

14. The General Meeting held on November 6 followed the Seminar. It was highlighted by a Report of the Chairman, Mr. Patrick Yeoh, to members and the election of a new Board of Directors. Elected were the registered representatives of the following banks:

15. The new Board, convened during a break in the General Meeting, elected a new Vice Chairman. The current Vice Chairman, Mr. Tetsuya Horie, automatically becomes the new Chairman under the provisions of the ABA Charter. In his acceptance speech of the Chairmanship of ABA, he said he will pursue the activities laid down by his predecessors and consult with members from time to time in evolving new programs for ABA. He appealed for the continued support of members to his new team as were given to his predecessors whom he praised for their achievements.

16. Mr. Reginald A.D. Nicolson, new Vice Chairman, said he will work closely and in cooperation with Mr. Horie as a team. He thanked members for their support and confidence in him to the post.

17. Based on a resolution of the Board, Mr. Horie presented a Distinguished Service Plaque to Mr. Patrick Yeoh for his eminent leadership and distinguished services as Chairman of ABA for 1988-1990.

20. The General Meeting adjourned with profuse thanks to the host member bank, The Long-Term Credit Bank of Japan.