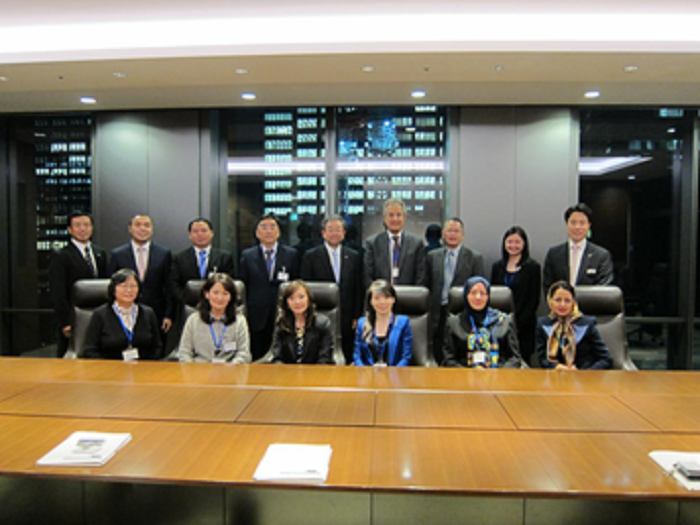 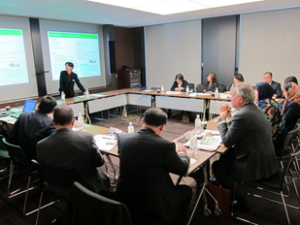 Mr. Kazunori Okuyama, Managing Director of SMBC and member of the ABA Board of Directors warmly received the program participants. Mr. Okuyama said in his welcome address that maintaining strong relationship with other Asian banks is important to SMBC, thus the bank values its ties with the Asian Bankers Association (ABA).

Mr. Okuyama emphasized that the short-term visiting program, the first event organized by SMBC since joining ABA, will not only enable the participants to gain information from the speakers but also allow them to expand their networks.

MBA president Mr. Bold Magvan recalled the success of the 30th ABA General Meeting and Conference in his opening remarks, and thanked SMBC for arranging the training program. He stressed the significance of ABA as a venue in which members can learn from one another through sharing various experiences and expertise.

Mr. Kenji Yumoto, Vice Chairman of the Japan Research Institute gave an insightful presentation on the Abenomics, referring to it as an epoch-making government initiative with a view to improve economy.

Mr. Kenji added that Abenomics has had big impact on the exchange and stock market in the early stage of Bank of Japan’s quantitative and qualitative easing (QQE), triggering the significant depreciation of yen, sharp rise in stock prices, and rise in expected and actual inflation rate. 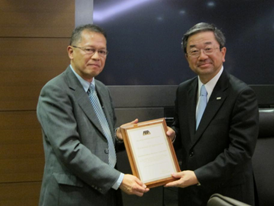 Mr. Rajeev Kannan, General Manager, Head of Project Finance Department, gave a brief overview of project finance in SMBC. Mr. Kannan presented several case studies of the project finance undertaken by SMBC during the previous years to provide a guideline on how the projects are executed.

Mr. Oka Yoshimasa of the Planning Department, International Banking Unit, gave a tour of the SMBC headquarters located at the financial district of Tokyo.

To formally end the program, Mr. Hiroshi Minoura, Deputy President and Head of the International Banking Unit delivered the closing remarks. Mr. Minoura said he remains skeptical about the future of Abenomics, but he is keeping his fingers crossed that the money will stay in the market. He stated that the rise of the stock market is the real indication of Japan’s economic growth.

Mr. Minoura also elaborated on the bank’s efforts to strengthen ties with ASEAN countries, noting its goal of continuous expansion in Asia. He said that SMBC cannot do it by itself, adding that the bank’s relationship with ABA members is crucial with SMBC’s development. Mr. Minoura expressed his gratitude to all the program participants and hopes to further improve ties and relations with them.

SMBC was established in April 2001 following the merger of two leading banks: Sakura, formerly Mitsui Taiyo Kobe; and Sumitomo. In August 2013, SMBC was chosen as the No. 1 Bank by AsiaMoney for providing cash management services in Japan and ranked in top 5 within the Asia Pacific region.

Following the training program hosted by SMBC, the participating members visited the Japanese Bankers Association (JBA) on December 3. The two bankers associations presented an overview of their organization’s history, membership, role and activities. Both JBA and ABA expressed their hopes of working more closely in bringing Asian banks together for advancing the cause of the banking and finance industry in the region and promoting economic cooperation.

Participants in the SMBC short-term visiting program visit the Japanese Bankers Association (JBA) to meet sits officers and learn about the activities of JBA and its role in promoting the interest of its members and the Japanese banking industry as a whole.