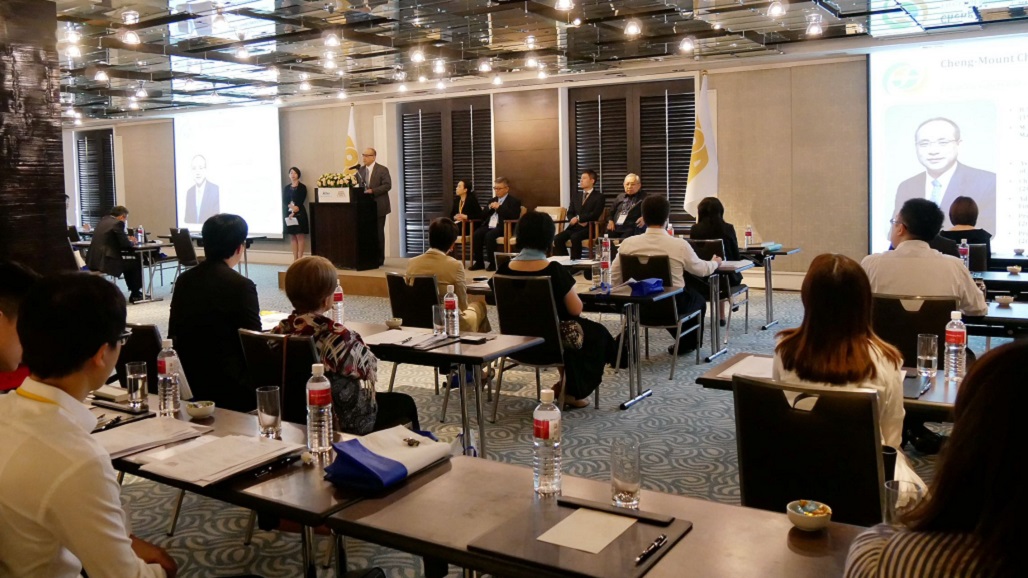 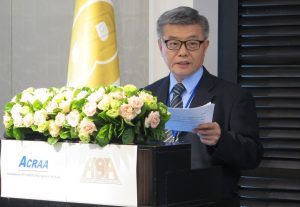 Taipei – Over 50 participants from 8 different Asian countries and 24 different financial institutions participated in the ABA sponsored “Bank Rating & Analysis Workshop”, held in the Conference One Hall at the Grand Hyatt Taipei on June 28th and 29th of 2018.

Organized in association with ACRAA (Association of Credit Rating Agencies in Asia), the workshop featured 6 key expert speakers and 9 specialized presentations geared towards senior level executives from the Credit, Finance, Investment and Treasury Departments of banks, as well as analysts from Securities and Insurance companies.

9 Presentations (7 PDF files) can be downloaded HERE from Google Drive.

All the photographs can be downloaded HERE from Google Drive.

The Opening Ceremony was initiated by Mr. Ernest Lin, ABA Secretary-Treasurer who welcomed all participants to the two-day intensive workshop. Mr. Satoshi Nagakawa, Special Representative for Asia and Special Advisor to the President for Global Strategy, Japan Credit Rating Agency, Ltd. (JCR) and current ACRAA Chairman, followed with his opening remarks highlighting the importance of credit rating in light of recent default cases. 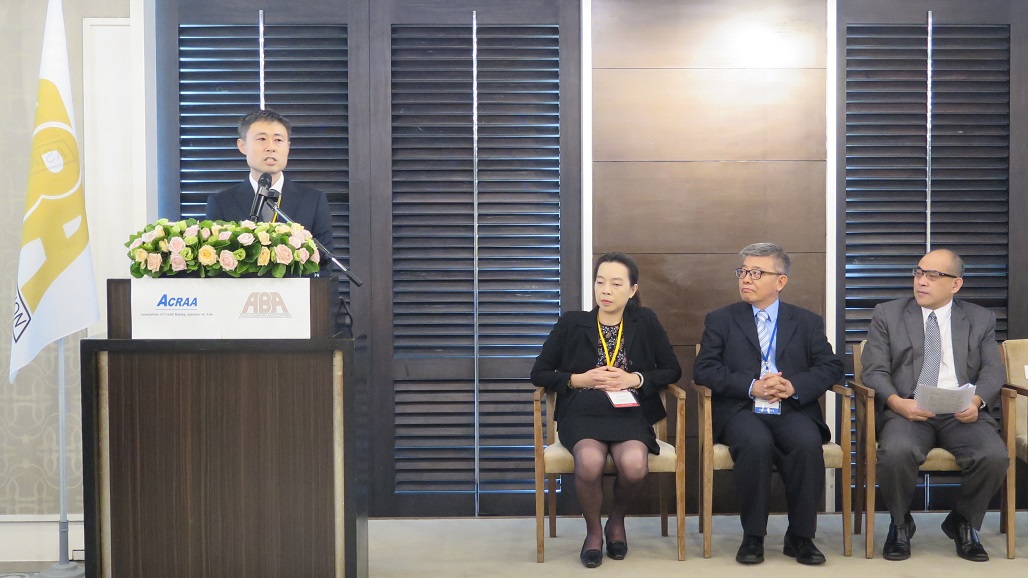 The Opening Ceremony concluded with Cheng Cheng-Mount, Vice Chairman of the Financial Supervisory Commission, who spoke about the importance of this kind of event for banks and financial institutions, as well as the professional upgrade that participants derive from this technical workshop.

After the Opening Ceremony, all participants and speakers posed for a group photo and soon after, the workshop proper was launched. 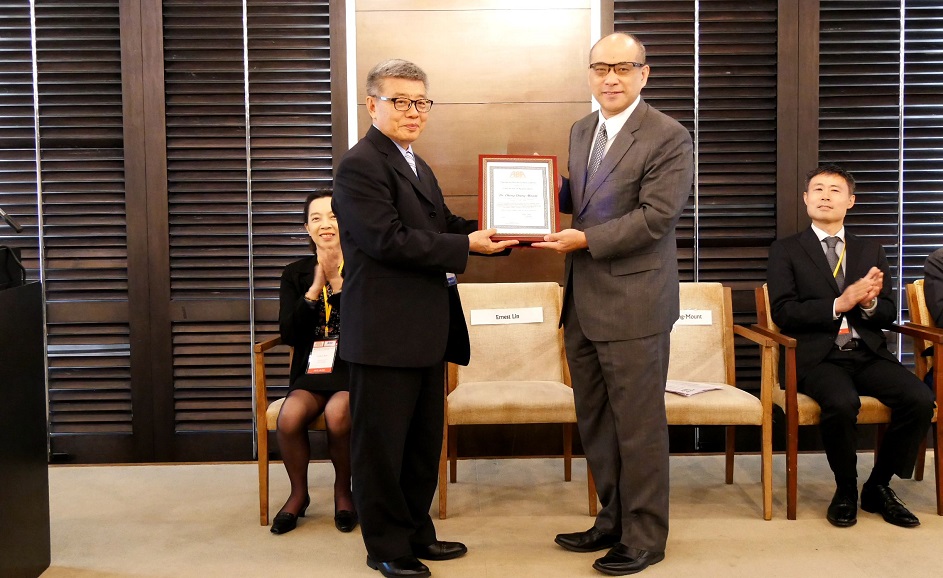 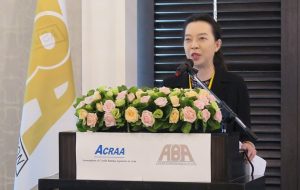 The first session “Bank Rating Overview” featured Ms. Grace Lee, President & CEO of Taiwan Ratings Corp.. In her presentation, Ms. Lee defined credit rating as opinions about the relative risk of an institution and made a clear differentiation between Issuer ratings and Issue ratings. 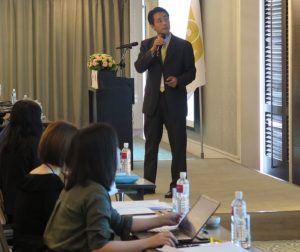 In terms of the business position, Mr. Chang explained that it is essential to understand the business model , its stability and diversification as well as the management team.

With respect to Capital and Earnings, Mr. Chang argued that capital’s type, size, loss absorbing capability, and the adequacy and the forward looking view of capital can be used to assess the rating position of the bank.

The third session “Bank Level Rating Assessment”, also conducted by Mr. Andy Chang, dwelled deeper into risk positions as they emerge in growing phases of the business as well as the changes in risk that occur in time. Another issue discussed was the risk not covered by the capital model.

The second part of the session dealt with funding stability, sourcing and contingency measures due to liquidity positions and interest rate exposure. Mr. Chang concluded that management of liquidity in different conditions is essential at this stage. 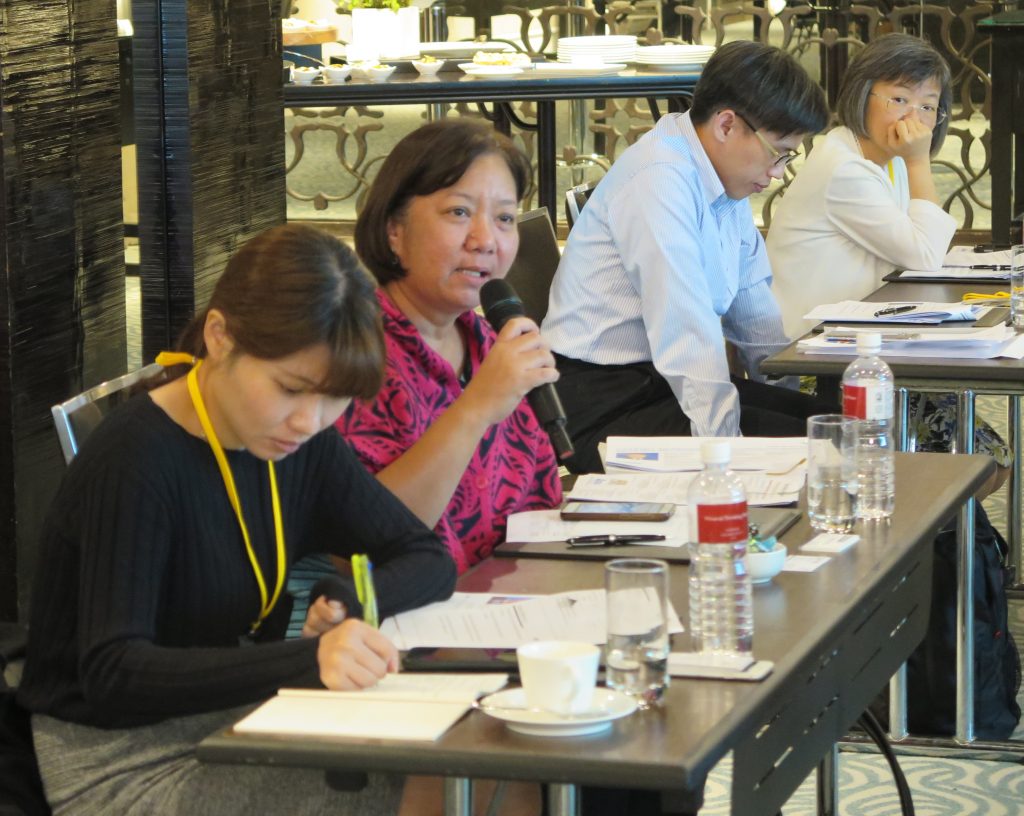 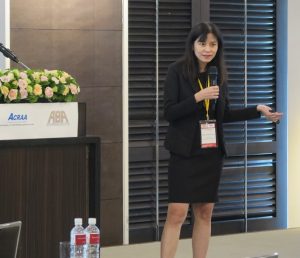 The fourth and concluding session on the 28th of June focused on “Bank Operating Environment Analysis” which was presented by Milly Leong, Technical Director of MARC (Malaysian Rating Corporation Berhad.)

The concluding issue of the session were the technological changes brought about fintech and its environmental impact in the sector. 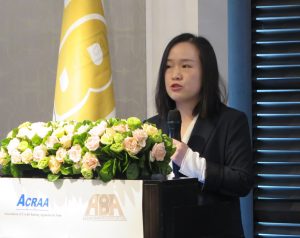 The second day of the Bank Rating & Analysis Workshop on the 29th of June, started with the “China Banking Sector” session presented by Ms. Qian Li, Deputy manager from the Financial Services Department at Golden Credit Rating International Co., Ltd.. Ms. Li explained that the present macroeconomic conditions in China sustain a stable momentum in the economy on one side while on the other side the Chinese regulatory system continue its implementation.

Ms. Li maintained that the upgrading of the financial system supports growth in the real economy as banks improve their situation. Moreover, the slowing down of asset growth has been in the making in recent years, allowing for better asset structure.

As the economy continues to expand, albeit at a slower rate, the proportion of deposits will continue to increase as liabilities are being diversified, she explained. 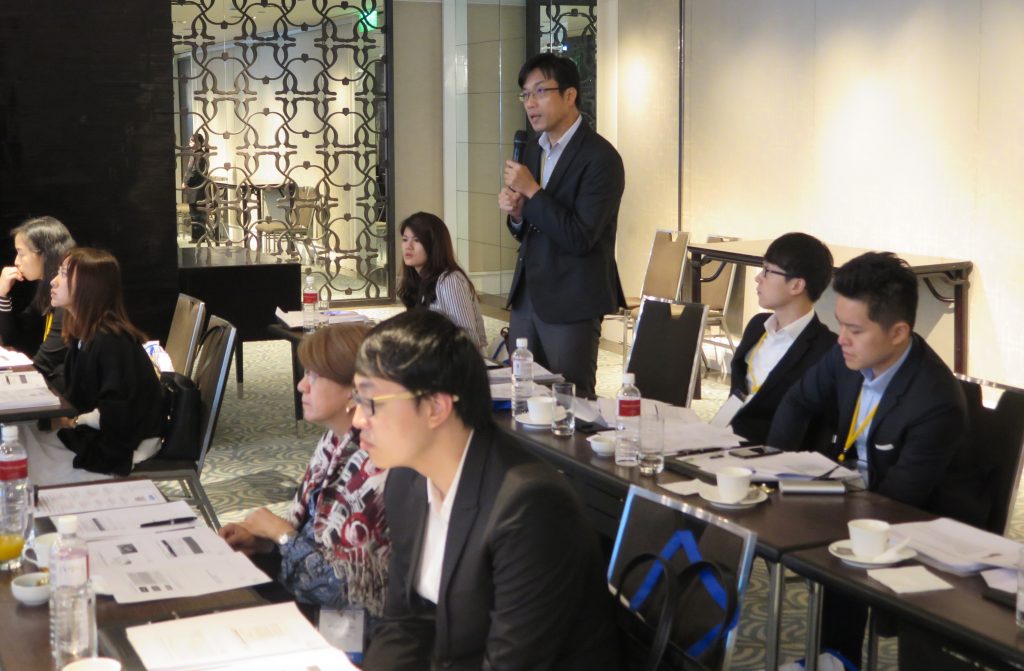 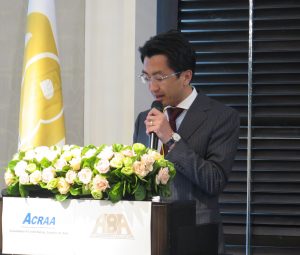 According to Mr. Miyao, major Japanese banks account for 36% of all deposits and 41% of loans in an environment with low corporate bankruptcy despite a less than 1% GDP growth. For instance, the largest Japanese financial group, MUFG, is ranked 5th in the world, and together with many other leading Japanese banks, enjoys excess liquidity but suffers from low profitability.

Thus it is expected that Japanese banks will venture overseas to find growth opportunities given the population decline and the expanding gap between deposit and lending in the domestic market.

Moreover, Mr. Miyao showed that the Japanese banking system is stable, with non-performing loan ratio as its historical low and the capital adequacy ratio at a relatively high state. Mr. Miyao argued that the low interest rate environment is challenging and the arrival of fintech players might impact the sector. 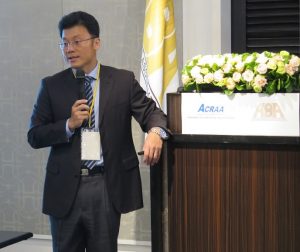 The eight session on “IFRS9 Impairment Standard” was also conducted by Mr. Sean Chen, Partner at KPMG. During his presentation, Mr. Chen explained that this new regulation is about estimating the expected 12-month and lifetime credit loss for financial assets.

The challenge presented by this new regulation is about the proper credit impairment recognition, loss provisions in financial statements, as well as credit origination and pricing. Mr. Sean argued that the implementation of these new regulations demanded new processes, data, models and infrastructure in the bank operations. 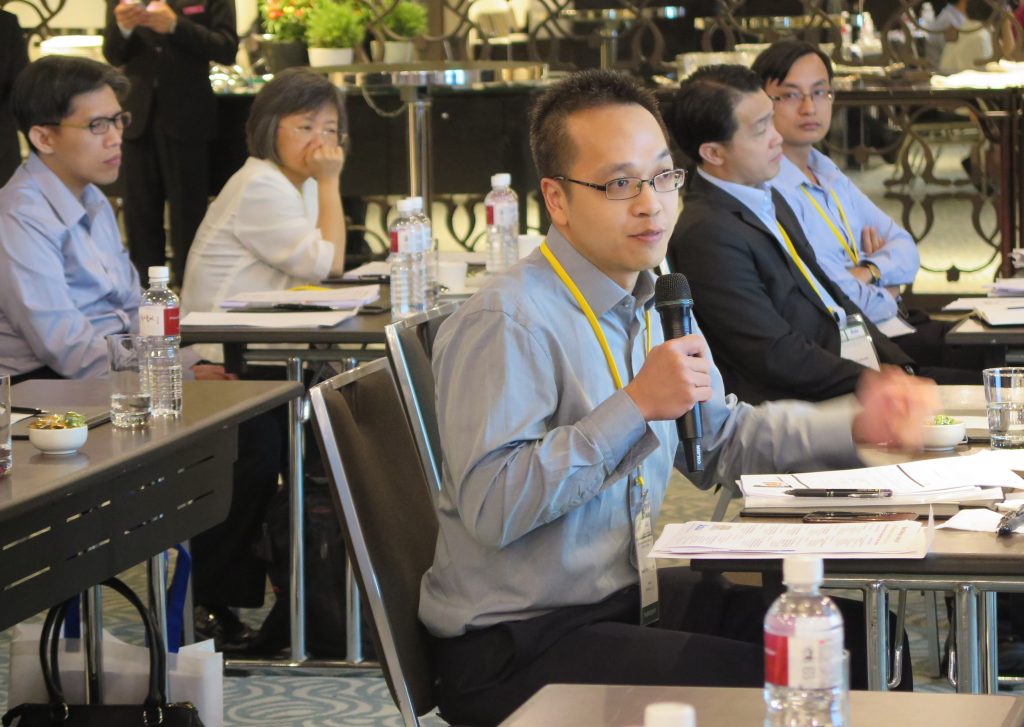 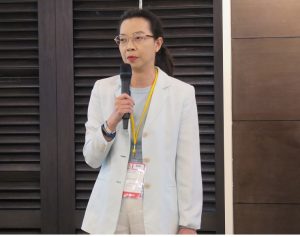 The “Wrap-up” session was chaired by Ms. Grace Lee, President &CEO of Taiwan Ratings Corp. who summarized the key issues discussed during two intensive days of presentations, insightful questioning and lively discussions from the part of participants.

Ms. Lee concluded the wrap-up session by highlighting special issues that participants needed to keep in mind as they return to their regular daily operations in their respective financial institutions.

During the Closing Ceremony, Mr. Satoshi Nakagawa, ACRAA Chairman, presented Certificates of Participation to each participant while Mr Ernest Lin, ABA Secretary-Treasurer, presented each speaker and member of the ACRAA delegation with tokens of appreciation for a job well done. 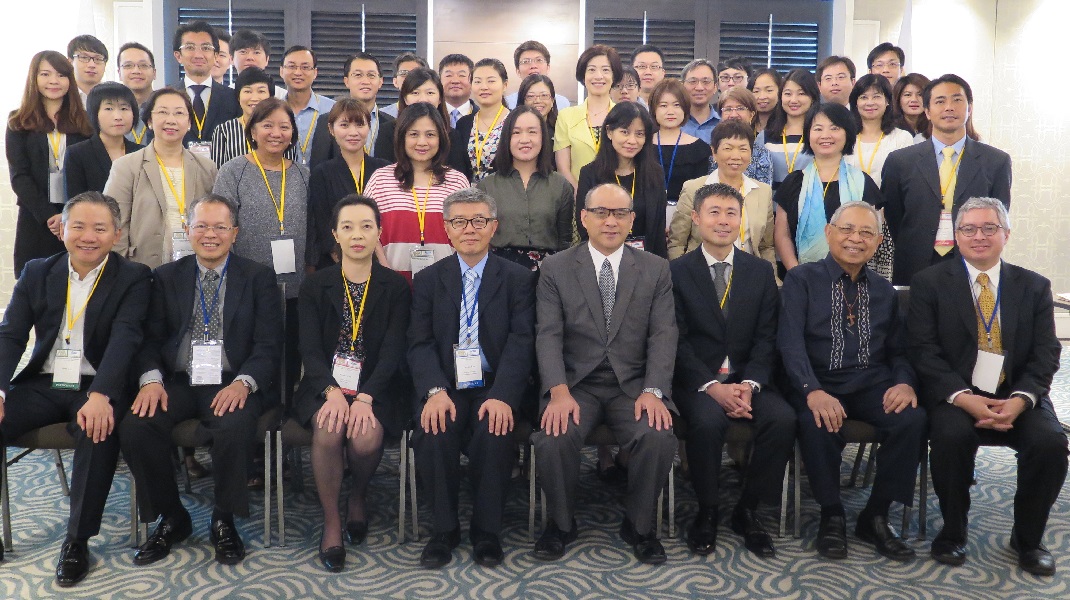 NOTE: This report is based on Ms. Grace Lee’s “Wrap Up & Key Points” presentation. Ms. Lee is President & CEO of Taiwan Ratings Corp.