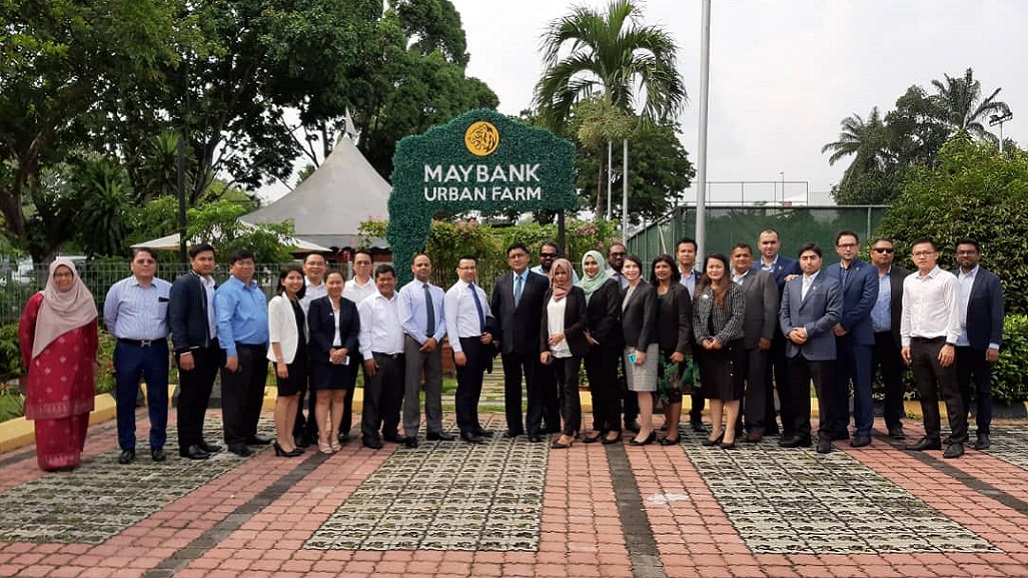 Maybank successfully conducted the two-day ABA Short-Term Visiting Program on Human Capital and Workplace Futurisation at the Maybank Academy in Bangi Selangor, in the outskirts of Kuala Lumpur, on October 1-2, 2019. The program, attended by 25 delegates from 15 banks originating from 8 Asian countries, featured 6 different banking subjects that mainly focused on Human capital management in banking, talent nurturing, succession and preparations for future changes in banking operations. 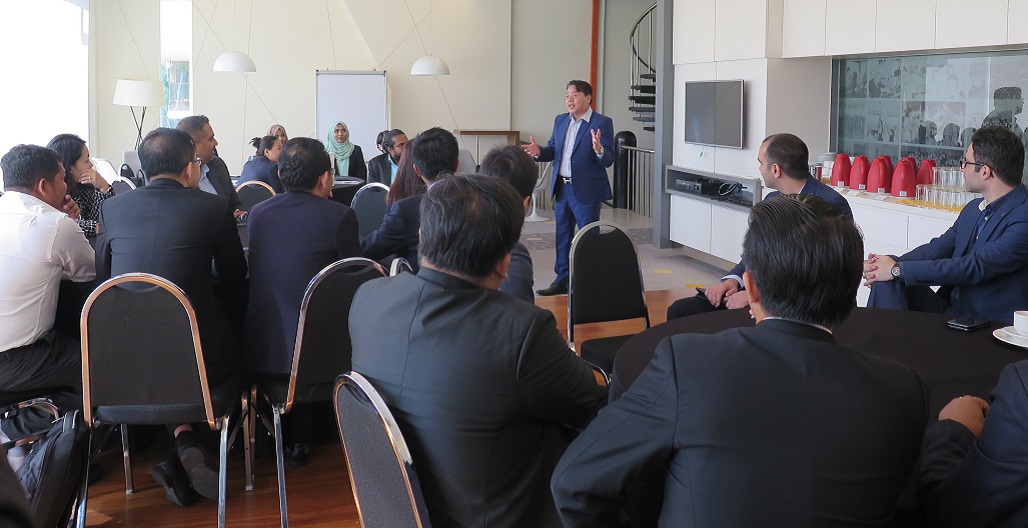 The morning program started on October 1st at 9:30am with a networking breakfast where participants had the opportunity to introduce themselves and their bank, and briefly described their national economy. The informal presentations and conversations quickly broke the ice among participants and set a friendly stage for lively discussions that lasted throughout the two-day training. 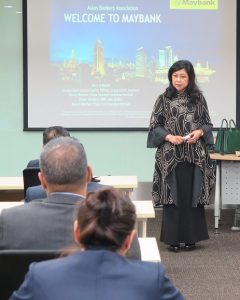 Soon after, the first session on “Welcome to Maybank” presented by Nora A. Manaf, Group Chief Human Capital Officer, officially launched the 2-day Training Program with an introduction about Maybank’s leading position in the Malaysian market, its presence in the ASEAN region, and the values guiding Maybank towards success.

As its logo features, the Malay Tiger is also the acronym defining Maybank’s values. They are T=teamwork, I= integrity, G = growth, E = excellence & efficiency, and R = relationship building. These values, according to Ms. Manaf clearly establish the mission of “Humanising financial services” for the benefit of all stakeholders: customers, employees, investors, and the environment.

Ms. Manaf further explained that Maybank’s aspiration is to advance Asia’s ambitions along with its customers and other stakeholders. To achieve such aspiration, personal relationships need to be strengthened. Thus Maybank’s emphasis in facilitating access to financing, customers-based advisory, fair terms and pricing, and being at the heart of the community it serves, rests on a motivated and well-trained workforce.

To conclude, Ms. Manaf discussed that despite drastic changes happening in the banking sector, Maybank is still committed to its workforce and does not entertain laying-off employees. Instead, Maybank has redoubled its efforts in retraining its employees into a flexible workforce capable of adapting to the emerging future of banking. 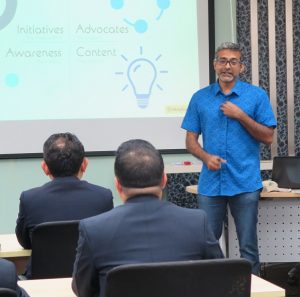 Mr. Subash explained that the traditional waterfall flow work procedure does not work anymore in a complex organization such as that of Maybank. Thus Maybank has been retraining the workforce towards a new type of work organizations, driven by the “Why method.” In this way, working teams could align their work with the customers’ personality, to provide a more quantitative and qualitative relationship.

According to the new method, Maybank is seeking thoughtful performers, motivated people with ideas who can define the problem and set a timeline for its solution. This new approach requires that tasks are executed in time, and that teams know why they operate in certain ways across different silos.

In fact, Maybank teams in different locations have been using scrum boards successfully to measure progress, yet the boards are adjusted to local particularities. Maybank expects that its usage will have a long-term impact as teams could start improving behavior, thus impacting productivity and ROI.

Mr. Subash also emphasized that team members and customers must be treated in a dignified manner. Customers’ interviews should cover issues well beyond business and that the information collected must account for qualitative factors that could result in faster and better services towards clients.

The second session was followed by a banquet lunch on Maybank’s Hall overseeing the large track and field installations in the Bangi area, near IOI city. 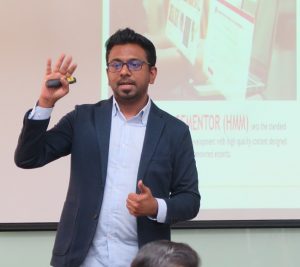 Mr. Letchamanan explained that organizations naturally tend to lean towards training more than towards hiring. Yet, a learning organization is a challenge that requires a top down approach. The need to inculcate learning among the staff has to be embedded into the organization’s psyche.

In such way, Mr. Letchamanan said that Maybank tries to personalize learning procedures using technologies to facilitate access at every level of the organization, from entry level, middle managers, senior managers, to top managers. Moreover, their training also includes re-skilling and up-skilling.

To account for the progress in Human capital’s learning and development, Group training and certifications are important strategic elements, Mr. Letchamanan added.

At the conclusion of the day, delegates visited one of Maybank’s sustainability projects: an urban farm created inside Maybank’s Bangi installations which featured crops, vegetables and produce. 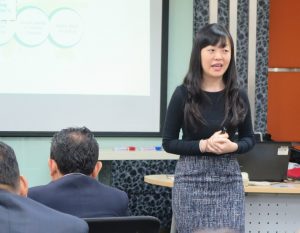 The second day, October 3rd, comprised 3 different sessions, starting at 9:30 am with the fourth presentation on “Workplace futurization – How do we keep ahead of game” under the guidance of Sophia Ang, Group Human Capital.

Today, Maybank is considered the most sought employer in Malaysia by university graduates. Yet, the reality was quite different several years back. In 2010, the same survey ranked Maybank number 17th. Fortunately, under the guidance of new top management, the situation was rapidly turned around and within a lustrum, Maybank became the top employer.

Ms. Ang, who participated in the turn-around, gave delegates an insider view of the interactions experienced and policies implemented to achieve such fast and lasting success. The transformation included visible and invisible changes, from logo, office design, teams’ reorganizations to management changes.

Many of their goals were achieved ahead of the 2020 deadline, such as Top ASEAN Community Bank, Preeminent ASEAN wholesale Bank Linking Asia, Leading ASEAN insurer, Global Leader in Islamic Finance, and Digital Bank of Choice.

Ms. Ang further explained that to sustain success into the new decade, the challenge is to develop world-class talents to deliver world class results. However, to detect, nurture and develop talent, a key component of success, it was determined that Maybank needed a new way of thinking to develop human capital.

Thereafter, the delegates enjoyed a tea break with delicious desserts, while other delegates continued the conversation with Ms. Ang on the side. 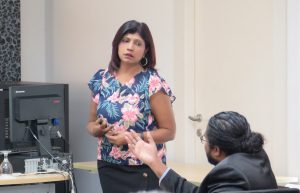 The fifth presentation on “Introduction to Group Succession and Talent Development” was presented by Ms. Navamalar Navaratnam, Head of Maybank Academy, Group Human Capital, who introduced the Talent System in Maybank.

These fundamental features that Maybank wants to inculcate among its workforce are just one component of a comprehensive plan to upgrade the whole workforce, implement a talent management strategy, talent classification, and talent transitioning towards leadership.

After determining potential talents, the candidates are then placed in different silos of competency and in conjunction with other development programs implemented company wide, Maybank tries to upskill the workforce to match Maybank’s overall human capital objectives such as increase woman leadership, execute mentoring programs, strengthen and sustain top leadership, and finally, attract top talents. 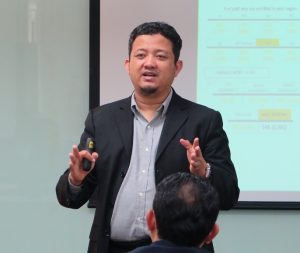 The sixth and final session on “FutureReady programme at Maybank” presented by En Mohamad Wan Fathi, Head Group Learning & Certification, Group Human Capital, set the stage for FutureReady Upskilling Programme, which is a program geared towards preparing its workforce to face the future of financial services.

The program, which is founded on two factors (1) FutureReady Knowledge & skills (2) FutureReady Mindset, brings tangible benefits to the workforce in the form of (1) Maybank certifications (2) External certifications, and (3) Top Development programmes.

In fact, Mr. Wan Fathi asserted that 96% of the workforce have completed the “Am I FutureReady Quiz” and over 18,000 staff have achieved FutureReady Level 1 certification.

The FutureReady program has a theoretical component, and a lab component that teach participants how to identify a problem, apply relevant FutureReady skills to solve the problem and finally propose solutions.

The session also convened Maybank speakers from the first day who joined the conversation and continued answering delegates’ questions.

After the conclusion of the 6th session, Mr. Moreno, Deputy Secretary Treasurer of the Asian Bankers Association thanked Maybank for sharing their know-how and hospitality. He then presented Mr. En Mohamad Wan Fathi, a small token of appreciation for his presentation.

Immediately after, each bank delegate stepped forward to receive from Mr. En Mohamad Wan Fathi and Mr. Moreno a Certificate of Participation to the ABA Maybank Program on Human Capital in Banking, which delegates considered innovative and insightful.