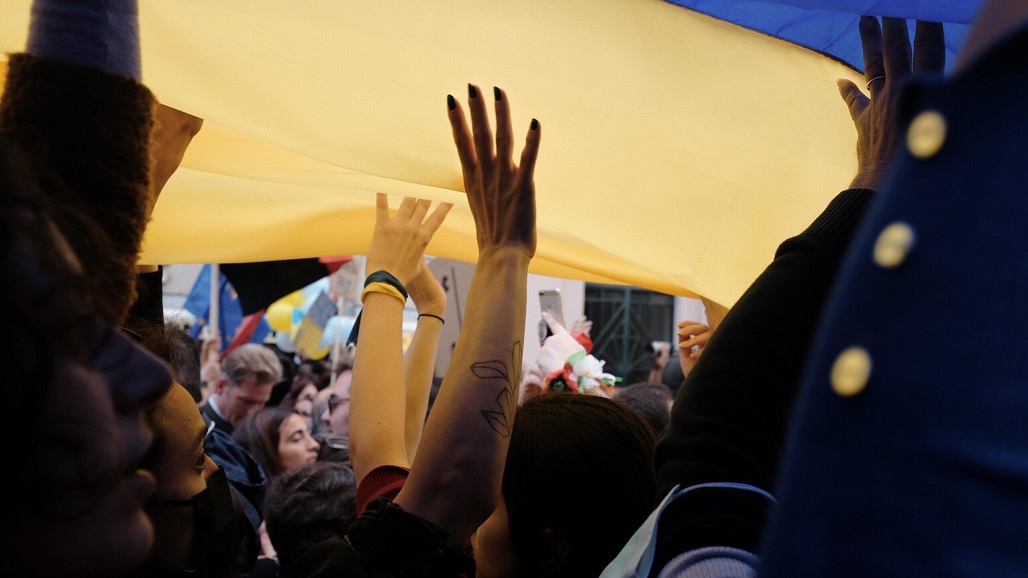 The crisis in Ukraine will raise food, energy, and other prices, while sanctions will disrupt financial markets in Asia.

The sharp escalation of the Russia-Ukraine crisis has led us to change our global baseline. This assumes a prolonged period of instability following the installation of a “friendly” government in Ukraine by Russia.

Our new baseline incorporates higher energy, food and other commodity prices over the medium term, as well as more financial market disruption and tougher EU and U.S. sanctions on Russia.

The impact of these changes on our global forecasts is expected to be significant, with Russia bearing the heaviest impact.

Exhibit 1: The Crisis Will Impact Both Growth and Inflation Adversely 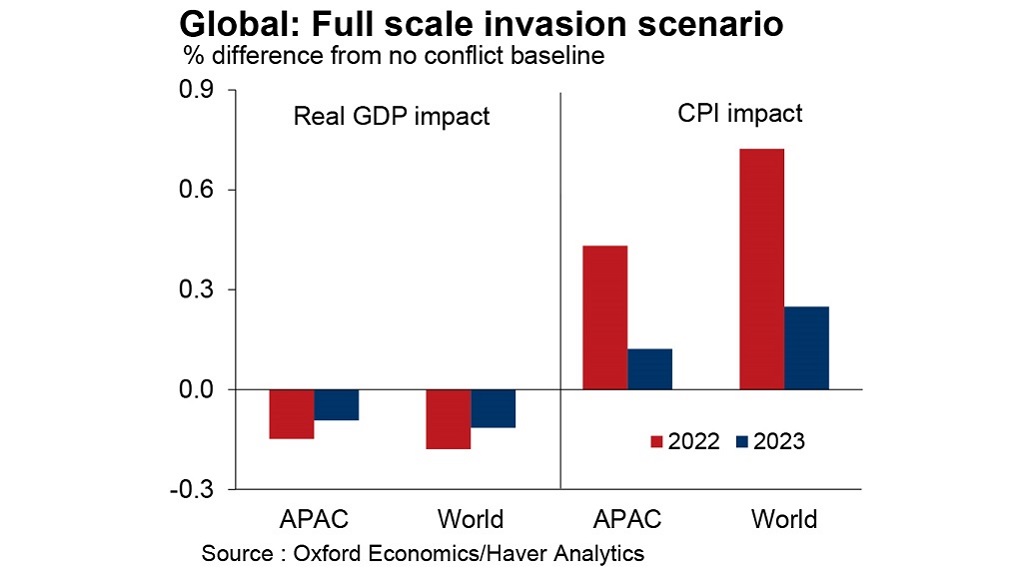 Limited Links With Russia and Ukraine, but Asia Not Completely Insulated

Asia’s geographical distance from the center of the crisis, and its weak trade and investment linkages with both countries, should shield it from a significant impact from either a collapse in Russian imports or any trade or investment barriers imposed by Russia’s administration.

Russia and Ukraine together account for less than 1% of total exports for most Asian economies (Exhibit 2). The notable exception is China. But even there, the share is not big enough to be of great concern. The picture is similar for imports. While import dependency is slightly higher compared to exports, Russia is not the main source of energy or other commodity imports for Asian economies. They largely depend on the Middle East for energy supplies and on intra-regional trade for other raw materials.

Exhibit 2: The Trade Channel Represents a Minor Source of Risk 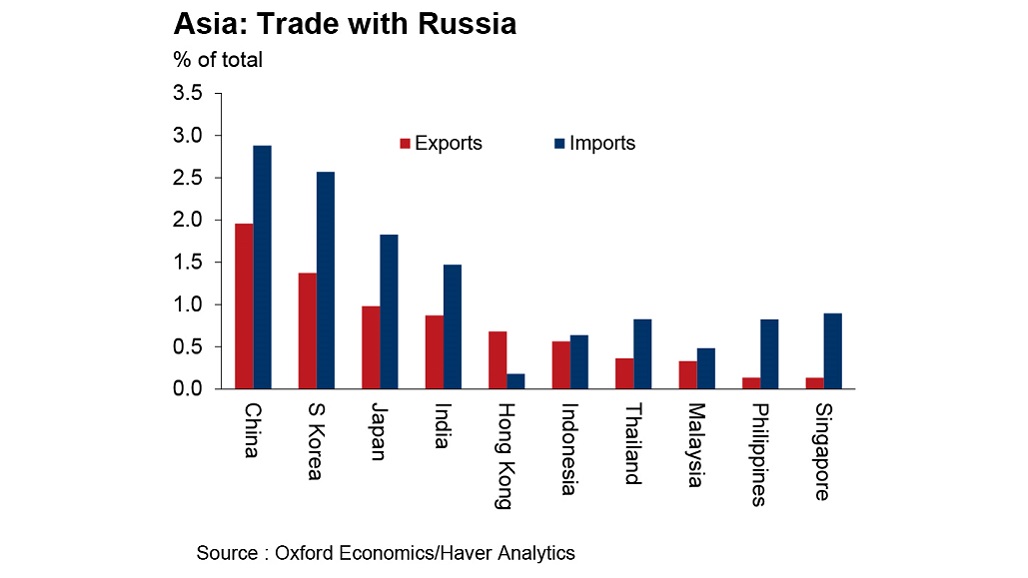 Russia is also not an important source of FDI, with a minuscule share of total FDI inflows into Asia. Despite its political proximity to India and China, it does not feature in the top 10 sources of FDI for either.

But this doesn’t mean that global developments will have no consequence for Asia. We see two main channels of impact. The first, and the most important channel, is via higher oil and commodity prices. We now expect oil prices to remain above $100/barrel until the early stages of the second half and also see the plausibility of the crisis pushing up base metal and food prices. This will result in a negative terms-of-trade shock for Asia, as it is a net commodity importer.

Simulations on our Global Economic Model show that an average oil price of $100/barrel in 2022 will lower Asia’s GDP growth by 0.2ppts, while raising inflation by 0.5ppts. Higher inflation will squeeze household spending across the board. But the eventual GDP growth impact will vary substantially across the region, with large oil importers such as South Korea, Singapore and India being most affected. Meanwhile, Malaysia will suffer less as it’s an oil exporter, and the cost for Indonesia will likely be offset to a large degree by it being a net commodity exporter (Exhibit 3). 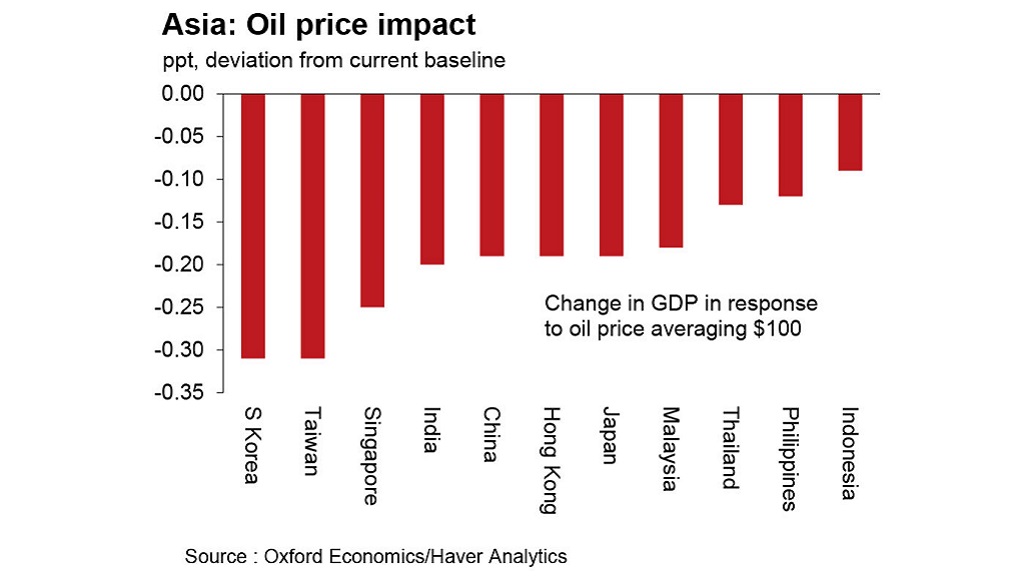 The second channel is lower foreign demand. With all major economies globally now expected to grow at a slower pace in 2022 and 2023, external demand will come under pressure. This has implications for the growth outlook of the more export-oriented Asian economies.

Other than these, risks to cross-border financial flows need to be monitored closely. At first sight, risks to Asia’s financial sector from the sanctions imposed on Russian banks appear low. Australia and Japan are the only APAC economies so far that have joined the West in announcing sanctions against Russia. Taiwan has announced its intention to do so.

We expect China to continue its economic engagement with Russia. But the latest energy deals and potentially new agriculture deals will likely be denominated in renminbi. Also, China’s commercial banks may scale back their financial transactions with Russia given their exposure to the U.S. dollar system.

Still, as past crises have highlighted, in an increasingly integrated global financial system that is dominated by the U.S. dollar, unexpected disruptions may materialize quickly. It’s likely that Asian markets will remain volatile for the foreseeable future in a risk-off environment (Exhibit 4).

Exhibit 4: Markets Will Likely Remain on an Uncertain Footing for Now 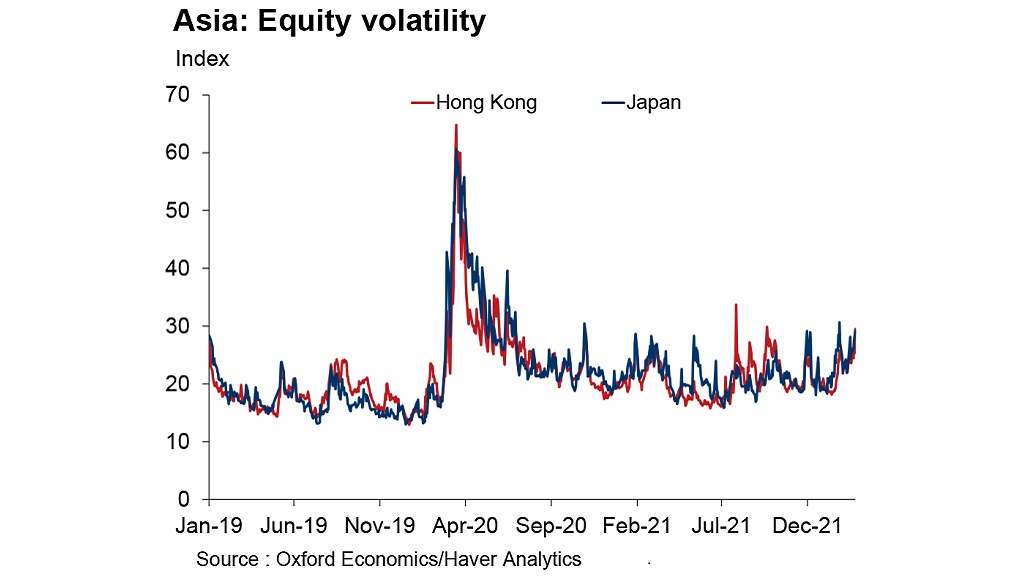 But eventually we are likely to see more differentiation based on economic fundamentals. Some Asian markets could benefit as relative havens of stability and increase their share of global capital flows. These risks, however, are likely to increase for the twin deficit countries — India, Indonesia, and the Philippines, and also Malaysia to some degree, given its dependence on foreign borrowings.

From a policy perspective, higher inflation and deteriorating deficits will increase the pressure on the Reserve Bank of India and the Bangko Sentral ng Pilipinas to act more aggressively, even as growth is slowing. How they navigate this policy dilemma will be crucial for investor sentiment and the future growth outlook. For now, we maintain our view of a more widespread, but relatively muted, tightening in Asia ex-China this year.

A version of this piece originally appeared on Unravel. 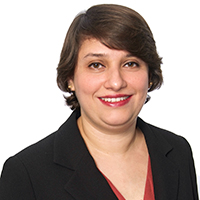 Asia: A Growth Puzzle, Once Again

How will the U.S. Presidential Election Impact Asian Economies?