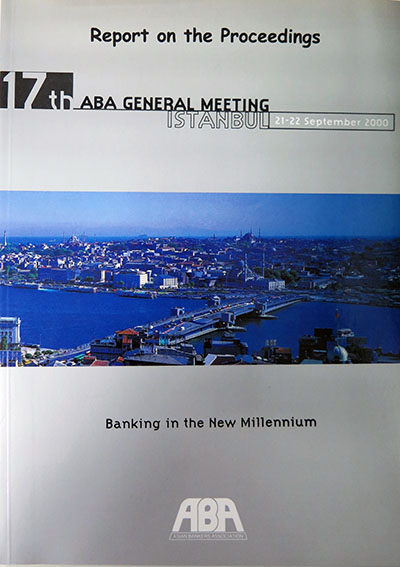 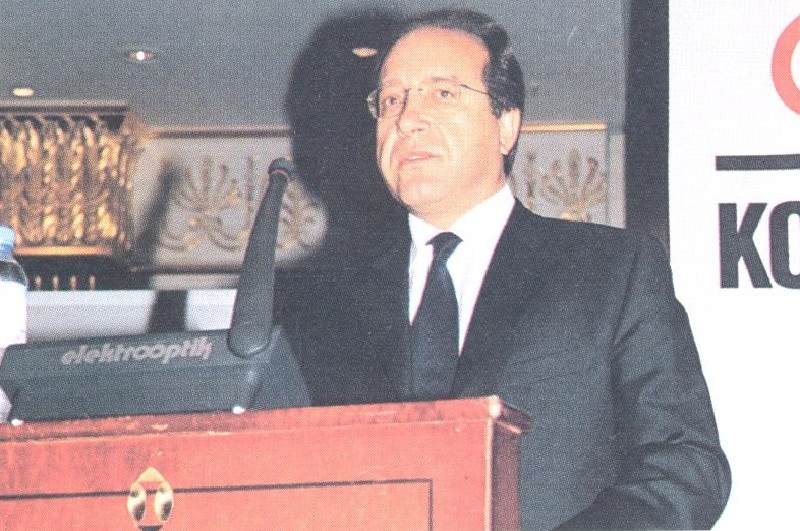 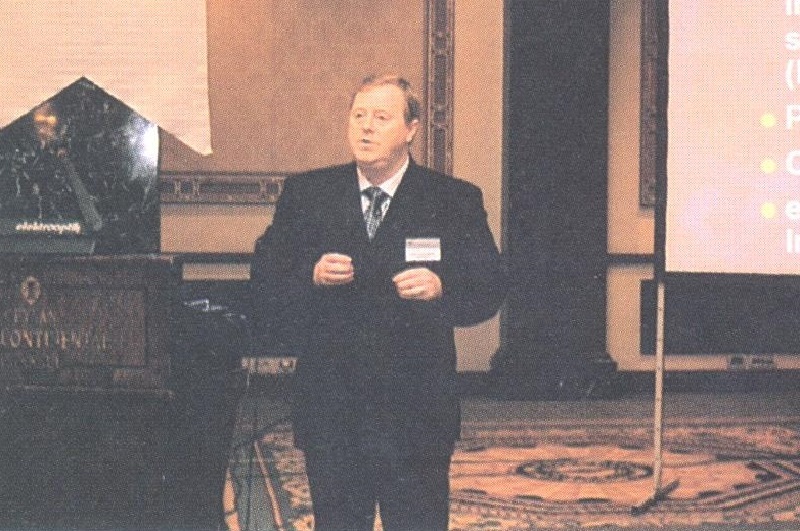 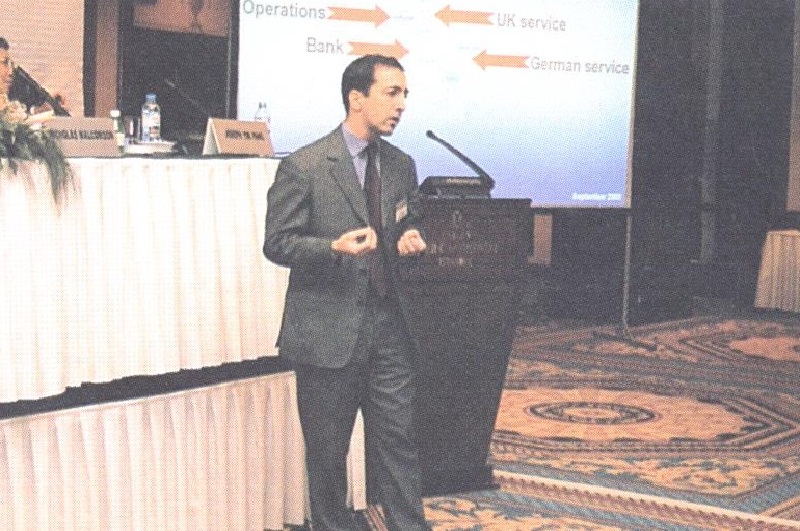 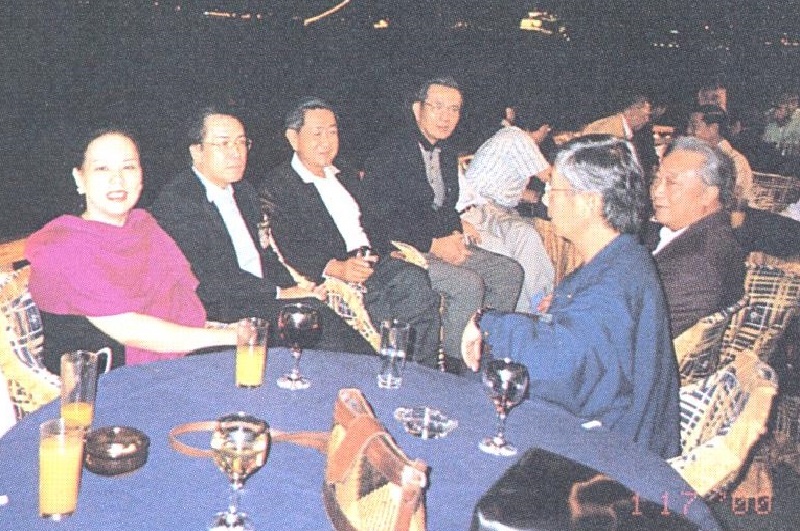 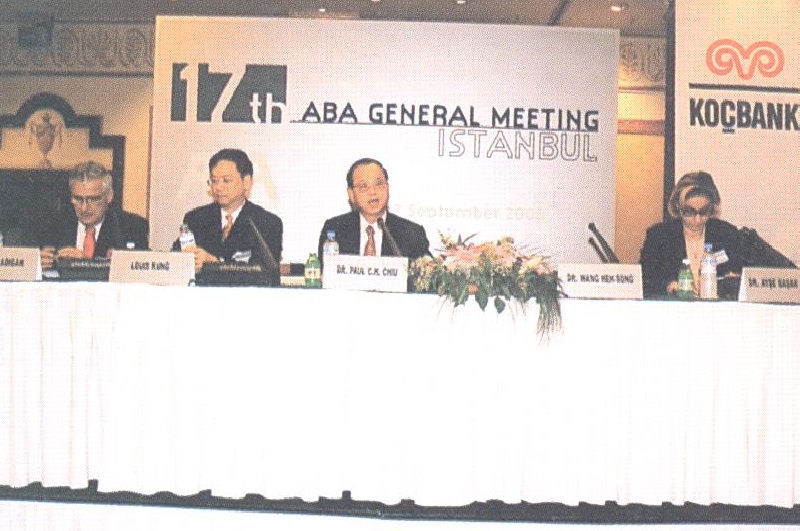 Banking in the New Millennium

1. The 17th ABA General Meeting and Seminar was held on 21-22 September 2000 in Istanbul, Turkey. Focusing on the theme ”Banking in the New Millennium,” the two-day meeting was attended by some 100 high-ranking executives of the biggest banking and financial institutions from around 25 countries in the region. This year’s gathering was hosted by the biggest bank in Turkey, Koçbank.

2. The 28th and 29th Board of Directors’ Meeting, as well as the Advisory Council and the Election Committee meetings, were also held in conjunction with this year’s General Meeting and Seminar.

3. The Istanbul meeting was inaugurated by Governor of the Central Bank of Turkey, Gazi Erçel. In his Keynote Address, Mr. Erçel said that with the advent of globalization and rapid integration of financial markets, what is important for banking systems is not the size but the level of compliance with the internationally accepted rules and standards, and their functionality. He also noted that advances in technology, capital movements and geographical extension of banking business have become the new engines of global integration. The full text of Mr. Erçel’s Keynote Address is attached as Annex 1. 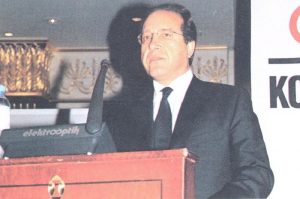 4. In His Welcome Remarks, Koçbank Chairman Burhan Karaçam said the ABA meeting in Istanbul was an important starting point for Asian bankers looking for opportunities in Turkey. He said that although assets of Turkish banks are smaller in comparison with their international peers, they have very strong technology base and offer services no less than those of their multinational competitors. He called on ABA members to establish closer relationship and increased collaboration with their Turkish counterparts. The full text of Mr. Karaçam’s Welcome Remarks is attached as Annex 2.

5. In his Opening Statement, ABA Chairman Datuk Amirsham Aziz said that the future of banking lies in technology. There is, therefore, an urgency for banks, regardless of their size and years of experience, to contemplate change in the way they conduct their business. He also called on banks to be mindful of the possible changes in the regulatory framework as the industry responds to the new banking landscape shaped by technological advancements. The full text of Datuk Amirsham’s Opening Statement is attached as Annex 3.

6. For his part, ABA Founder and Chairman Emeritus Amb. Jeffrey L. S. Koo, in his response to the address of Governor Erçel, cited the significance of holding this year ‘s ABA meeting in Istanbul. He said it is another example of how the process of globalization has allowed bankers from Asia to reach out to their colleagues in places such as Turkey and has given them the opportunity to explore possible areas of cooperation in countries which in the past were considered remote by Asian banks. This, he said, is in line with the primary objective of ABA to provide a forum for networking among bankers not only in the Asia but outside the region as well. The full text of Amb. Koo’s Response is attached as Annex 4.

7. This year’s gathering featured a seminar focusing on the theme ”Banking in the New Millennium.” Experts from different fields spoke on various aspects of the theme with the view to helping delegates obtain a better understanding of the rapidly changing environment of the 21st Century. Leading the speaker line-up was Dr. Paul C. H. Chiu, former Finance Minister of the Republic of China, and currently Chairman of Grand Cathay Securities Corp. Mr. Chiu spoke on the topic ”Regulatory Environment for the Banking Sector in the New Environment.” Other speakers included: Mr. Louis T. Kung, Vice President and General Manager, The Bank of New York, Taipei Branch, who spoke on ”Trends and Challenges for the Banking Sector in the New Millennium”; Mr. Terry Bradigan, Managing Director, Financial Services Asia Pacific, KPMG Consulting, ”Responding to the New Challenges.”; Mr. William E. Smith, Manager for Europe, Middle East & Africa Finance Industry of Microsoft, ”Technology Trends: A Vision of the Future.” and Mr. Nicholas Malcomson, Chief Executive Officer of first-e Asia, whose parent company, first-e, is the largest Internet Bank in Europe and the leading provider of financial services in the world, ”Cyberbanking.” Acting as commentators were Dr. Ayse Basar Bener, Professor, Bosphorous University in Istanbul, and Mr. Joseph Y.W. Pang, Executive Director and Deputy Chief Executive, Bank of East Asia Ltd.

9. Delegates noted that the responses of banks and financial institutions to the new challenges have taken various forms. One example has been the wave of mergers among banks, as well as between banks and firms in other financial services sector. Another has been the application of new technologies in financial services. The ABA recognized that many factors affect the capability of firms to respond to these challenges, and that the situations for banks and financial institutions vary with respective levels of economic development, culture, market characteristics, and policy and regulatory environments.

10. Seminar participants acknowledged that technology is a fundamental force that is rapidly revolutionizing the economic landscape today. Advances in information technology are changing the way business is being done in all industries, as demonstrated by trends in such sectors as retail trade, manufacturing and the knowledge industries. In the area of banking and finance, new technologies are opening up vast opportunities, but also posing numerous challenges.

11. Seminar participants agreed that the adoption of currently available technologies is crucial for the survival of firms, especially in the competitive banking sector. Particularly, information technology offers many new possibilities for banks to offer both new and traditional services in more effective and efficient ways. They noted that cyberbanking is one of the major trends in the banking industry today. 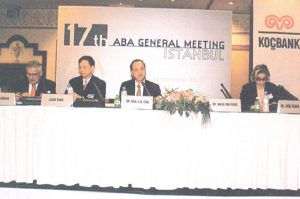 12. Chairman Datuk Amirsham Aziz presented his Report highlighting major activities during the past year. Among the important accomplishments he cited were:

13. The full text of the Chairman’s Report is attached as Annex 5.

Election of New Board Members

14. On behalf of the Election Committee Chairman Peter B. Favila, Amb. Jeffrey L. S. Koo presented the names of 24 members qualified to sit on the ABA Board for 2000-2002, based on the results of the canvassing conducted earlier. The General Meeting unanimously elected the 24 nominees.

15. In his Valedictory Address, outgoing chairman Datuk Amirsham said that ABA members can be justifiably proud that notwithstanding the financial crisis of 1997-1999, the Association has exhibited resilience and resoluteness, and emerged as a credible and internationally recognized consultative body. He attributed this to ABA ‘s cooperative spirit and expressed hope that the strong sense of partnership among members will be further strengthened and extended to the new Chairman. The full text of Datuk Amirsham’s Valedictory Address is attached as Annex 6. Per resolution passed during the 28th Board of Directors’ Meeting, a plaque of appreciation was presented to Datuk Amirsham in recognition of his important contribution and distinguished service to ABA during his two-year term as Chairman.

16. Dr. Lee Yung-san was formally sworn in as new Chairman of ABA by Amb. Jeffrey L. S. Koo. In his Acceptance Speech, Dr. Lee called on the ABA to play a pivotal and catalytic role in the region. He said that during his two-year term, he will focus his efforts on activities that will further help the ABA attain its primary objectives of providing a forum for advancing the causes of the banking and finance industry and promoting regional economic cooperation. The full text of Dr. Lee’s Acceptance Speech is attached as Annex 7.

28th Board of Directors’ Meeting 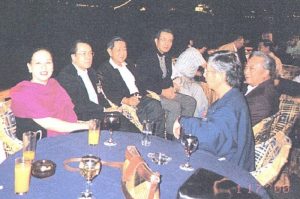 17. The 28th Board of Directors’ Meeting was held on 21 September 2000, with Datuk Amirsham presiding. Among the major items taken up during the meeting were the following:

29th Board of Directors’ Meeting

18. The 29th Board of Directors’ Meeting was held on 22 September 2000. Incoming Chairman Dr. Lee Yung-san chaired the meeting. Among the items discussed were the following: