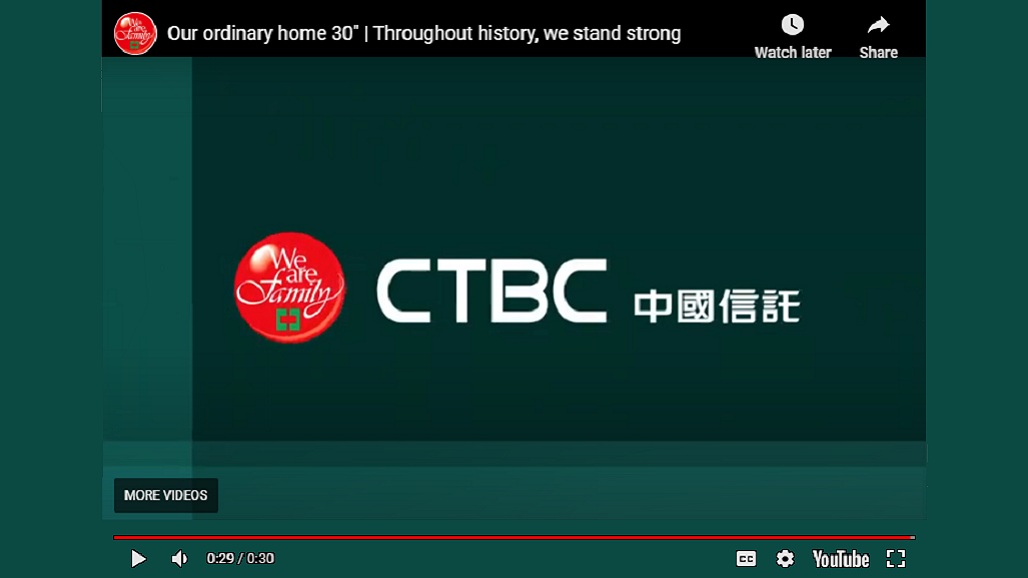 TV host Ugur Rifat Karlova, as well as YouTubers Logan Beck and Ikulaoshi have all given thumbs-up to CTBC Bank’s “Our Ordinary Home”, a video that ties together Taiwanese history in telling the story of the nation’s response to the COVID-19 pandemic.

The video, released in June, has already received more than 11 million views, including 2.3 million from 23 countries and areas outside of Taiwan.

The CTBC Bank-produced brand image video depicts Taiwanese as they go about their day relatively unaffected by the pandemic.

CTBC Financial Holding Co chief administration officer Roger Kao said that with the pandemic nearing its eighth month, the video offers something different, as it emphasizes how Taiwan’s history has shaped the spirit with which Taiwanese have responded to the pandemic, and their experience in dealing with several challenging events over the past 50 years.

The video portrays scenes from the lives of ordinary people from the 1970s to the present, intertwining vignettes set against the background of historic events, such as the loss of the Republic of China’s UN seat, the ending of official diplomatic relations with the US and the SARS outbreak — all events that forged the spirit of ordinary Taiwanese and prepared them for the pandemic, the bank said.

The video has been viewed and commented on by people from places such as Hong Kong, Vietnam, Malaysia, Indonesia, the US, Canada and Japan, with almost 40% of the views on YouTube from people overseas.

Comments from Singapore praised Taiwan’s response to the pandemic, and how the video helped bring the nation closer to the international community.

The video follows on the success of Home Run Taiwan, a video produced by CTBC last year, which won silver in the “sports” category of Campaign magazine’s PR Awards Asia 2020, the first time a financial institution has won in the sports category for a corporate video in Taiwan.

Home Run Taiwan was produced for last year’s World Baseball Softball Confederation Premier 12 B team preliminary heats in Taiwan. The video focused on the rigorous training regime of the Chinese Taipei team. It was regarded as the most successful YouTube ad in Taiwan for last year.