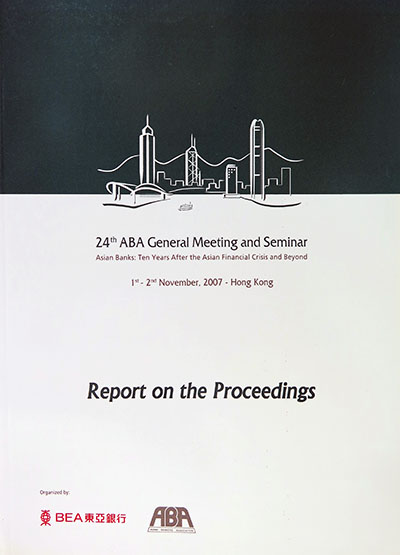 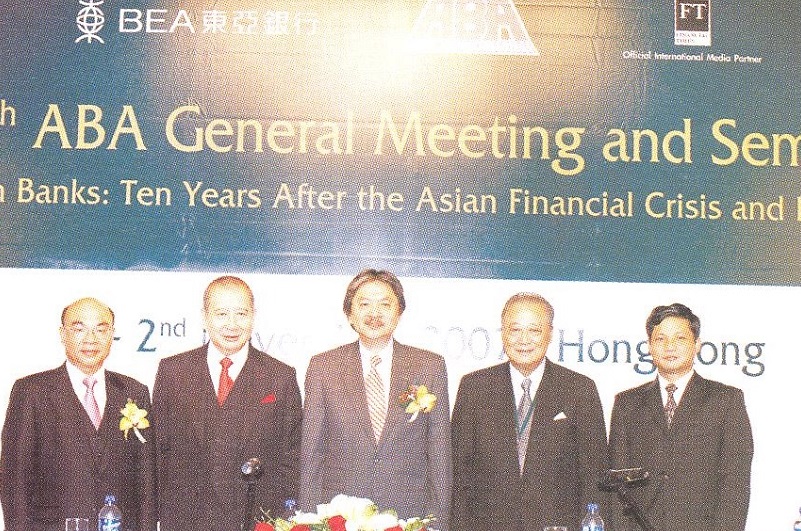 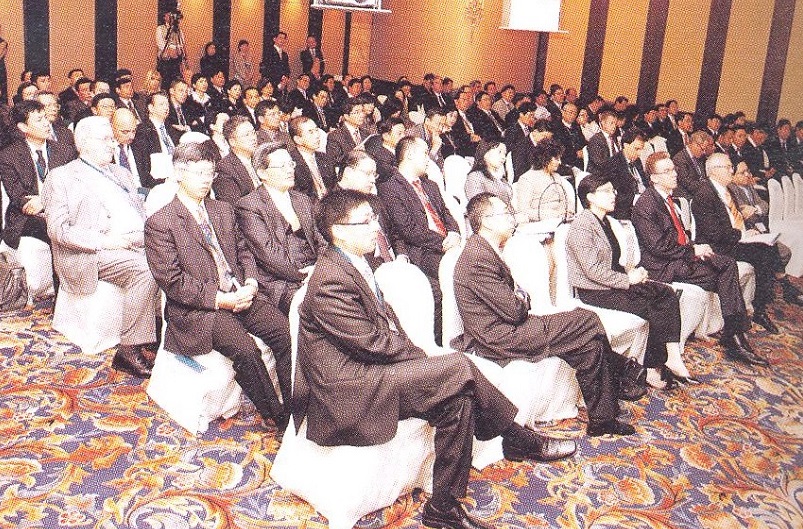 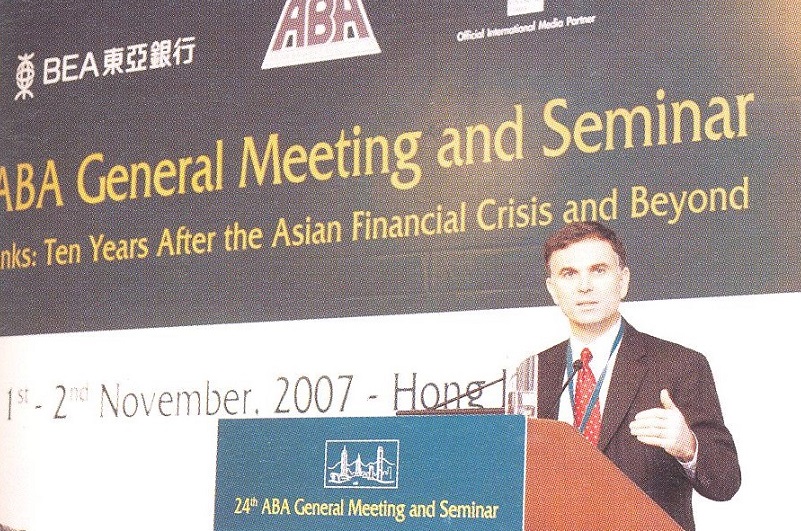 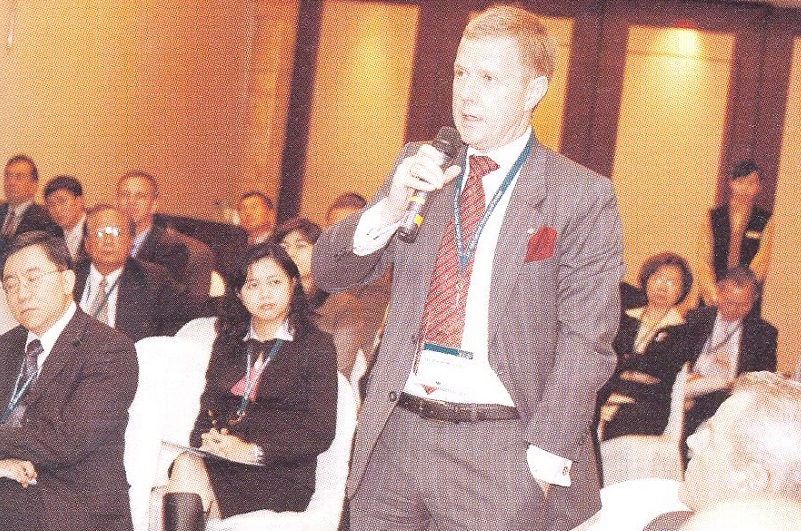 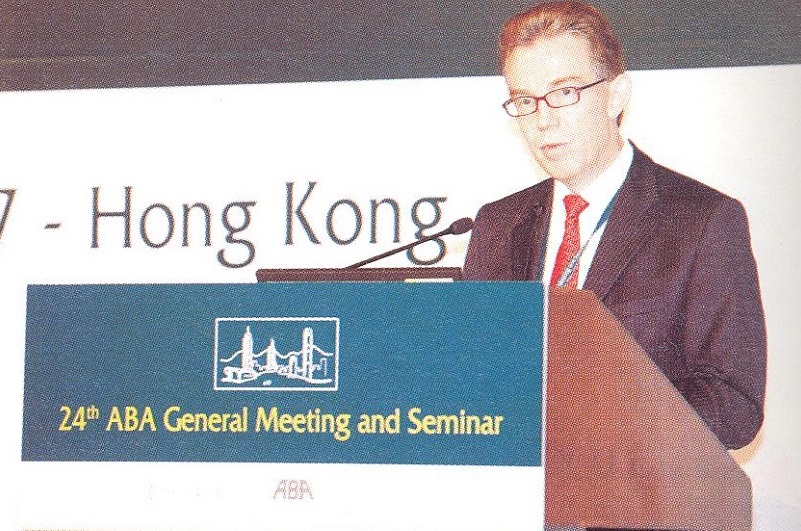 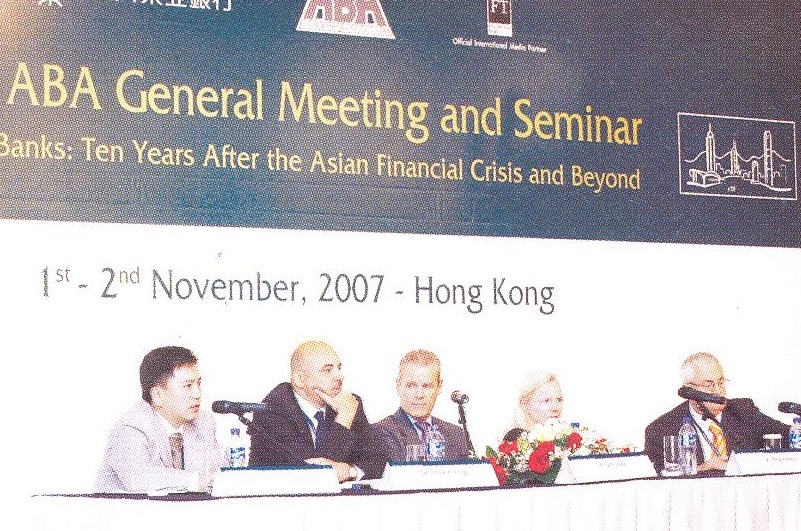 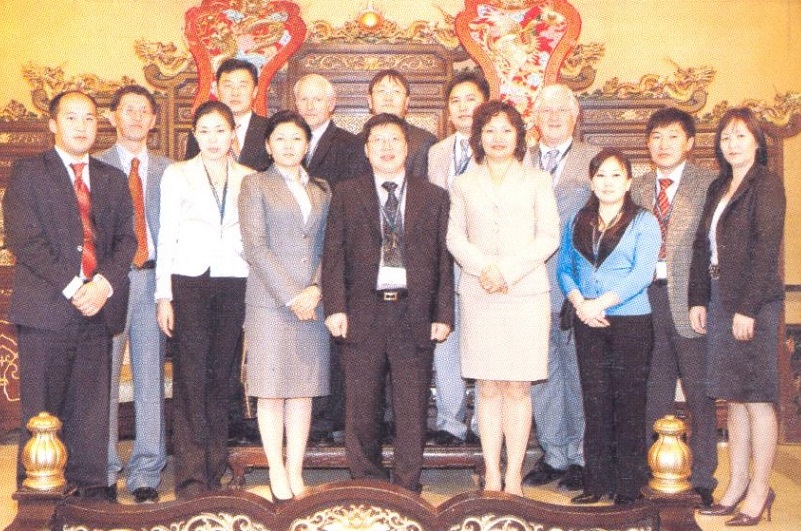 Asian Banks: Ten Years After the Asian Financial Crisis and Beyond

2. Hosted by The Bank of East Asia Ltd., the Hong Kong meeting focused on the theme ”Asian Banks: Ten Years After the Asian Financial Crisis and Beyond.” Eminent speakers were invited to review the impact of the crisis and the policy responses that have shaped the current financial environment, discuss opportunities and challenges arising from recent developments in the global and regional macroeconomic situation and in the Asian banking industry, and examine two markets that are playing increasingly important roles in the region’s financial landscape and economic development, namely, microfinance and Islamic banking and finance. 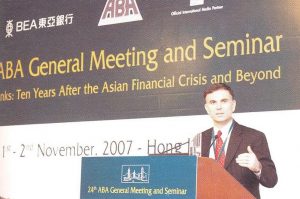 3. The 39th Board of Directors’ Meeting was also held in conjunction with the 24th annual meeting. The ABA Board discussed internal policy matters and reviewed the status of the various ongoing ABA projects and programs.

4. The Hon. John C. W. Tsang, JP, Financial Secretary of Hong Kong S.A.R., delivered the Keynote Address during the Opening Ceremony. In his Keynote Address, Secretary Tsang urged ABA member banks to be always prepared for a financial crisis similar to the one that hit the region in 1997. He noted that every economy in Asia has its own unique tale to tell of the decade since the financial crisis took hold. But he stressed that ”we have all emerged stronger and wiser from the experience”. The Financial Secretary also talked about how Hong Kong stood up to these testing times, and what it has been doing to strengthen its financial infrastructure, in particular the banking sector, in the past decade. Secretary Tsang also underscored the need for regional cooperation to achieve regional financial stability, and urged everyone to play a part in sharing ideas and promoting understanding within the region. The full text of Secretary Tsang’s Keynote Address is attached as Annex 1.

5. In his Response to Secretary Tsang’s Keynote speech, ABA Chairman Emeritus Dr. Jeffery L. S. Koo noted that Hong Kong plays an important role in the region’s financial system. “It is not only a major financial center in Asia, but it also serves as a model for the development of financial markets. Hong Kong’s participation in the work of the APEC Finance Ministers has contributed significantly to the strengthening of financial systems in our region,” Dr. Koo said. He expressed his hopes that Hong Kong would continue to play a leadership role in regional financial development, and thanked ABA member banks based in Hong Kong for their support of the Association.

6. For his part, Dr. David K. P. Li, Chairman and Chief Executive of The Bank of East Asia, this year’s host bank, thanked the ABA for giving the Bank the opportunity to let the delegates experience first-hand how Hong Kong is moving to create a truly world-class financial service platform for the region. ”I believe we are very ·fortunate to have this opportunity to meet, learn from our expert speakers, to share our knowledge, and to return to our home countries wiser and better prepared for the challenges ahead,” Dr. Li said. ”By sharing experience through the ABA, all of us are stronger. We are also better able to take advantage of the rich opportunities emerging in the current dynamic business environment,” he added.

7. ABA Chairman Mr. McKinney Y. T. Tsai, in his Opening Remarks, said that the theme for the Hong Kong meeting was chosen primarily to give ABA members the opportunity to review the causes and impact of the crisis, discuss the conditions in the affected countries today, examine how their policy responses to the crisis have shaped the current Asian financial environment, address the challenges they continue to face, and identify the new opportunities arising from recent developments in the global and regional macroeconomic situation.

8. The seminar was divided into four sessions

10. A Special Session was held on the afternoon of November 1 focusing on ”Basel II: Implementation Issues and Concerns.” Mr. Johnny C. D. Mao, Chief Risk Officer at the Bank of East Asia Ltd., shared his practical experience on the issue as a banker, while Mr. Peter Li, Partner at PriceWaterhouseCoopers, presented a consultant’ s point of view.

39th ABA BOARD OF DIRECTORS’ MEETING

11. The 39th ABA Board of Directors’ Meeting held on the afternoon of November 1 discussed internal policy issues and took action on a number of important matters. Among others, the ABA Board:

12. The 24th ABA General Meeting was held on the afternoon of November ad presided by ABA Chairman Mr. McKinney Y. T. Tsai. Among others, the General Meeting: approved the Chairman’s Report, which summarized the activities undertaken by the ABA over the past year in the area of policy advocacy, training programs for members, membership drive, relationship with other regional bankers groups, and participation in other regional events.

13. Mr. McKinney Y. T. Tsai, Dr. Jeffrey L.S. Koo, Dr. David K. P. Li, and ABA Vice Chairman Dr. Vu Viet Ngoan from the Bank of Foreign Trade of Vietnam headed the panel that responded to the questions fielded by the media people during the Press Conference held on the afternoon of November 2. A copy of the Press Release issued by the ABA and distributed to the press people at the Press Conference is attached as Annex 2.